Two studies published within two months of each other show that typhoons and hurricanes are getting slower, and are expected to slow even more as the planet warms, suggesting that climate change is already extending the time storms spend hammering communities, National Geographic reported Wednesday. 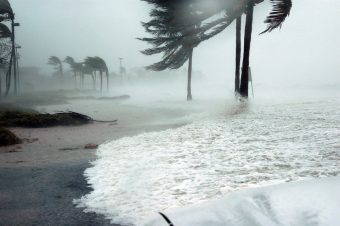 The findings mean that storms like Hurricane Harvey, which caused massive flooding when it lingered over Houston, Texas in 2017, could become more common.

“Nothing good comes out of a slowing storm,” National Oceanic and Atmospheric Administration (NOAA) Center for Weather and Climate scientist James Kossin told National Geographic. “It can increase storm surge. It can increase the amount of time that structures are subjected to strong wind. And it increases rainfall.”

Kossin wrote one of the new studies, published in Nature Wednesday, which found that tropical cyclone speed had slowed by an average of 10 percent worldwide from 1949 to 2016.

Another study, led by researchers with the National Center for Atmospheric Research (NCAR) and published April 6 in the Journal of Climate, plugged 22 hurricanes from the past 13 years into climate models with temperatures up to five degrees warmer and found that the storms were on average nine percent slower and 24 percent wetter.

“We’re showing that it not only slows down, but that it’s more intense,” lead author on the second study Ethan Gutmann told National Geographic. “That has serious implications for inland flooding and urban infrastructure.”

While Kossin’s study was only observational and did not address why storms had slowed since 1949, Gutmann’s future analysis backs up the hypothesis that global warming is already slowing storms.

Kossin told The Washington Post that his findings were also consistent with the fact that climate change is warming the poles faster than the tropics, slowing circulation, which should also slow storms.

“I went in with that hypothesis and looked at the data, and out popped the signal that was much bigger than anything I was expecting,” Kossin told the Post.

Regionally, the biggest slowdown was over the Western North Pacific, at 20 percent. The storms also slowed more over land, Kossin found, slowing 20 percent over land in the Atlantic region.

Kossin also said slowing storm speed could be a larger contributor to increased flooding than augmented rainfall intensity, since it is happening at a faster rate. Hurricane rainfall is expected to increase seven to 10 percent per degree Celsius of warming, but Kossin found a storm speed decrease of 10 percent in a period that saw just half a degree Celsius of warming.

Either way, both studies indicate the nature of tropical cyclones, and the threats they pose, are shifting with the climate.

“Inland flooding, freshwater flooding, is taking over as the key mortality risk now associated with these storms,” Kossin told The Washington Post. “There’s been a sea change there in terms of what’s dangerous. And, unfortunately, this signal would point to more freshwater flooding.”