Hurricane rainfall could increase by a third and wind speeds boosted by up to 25 knots if global warming continues.

Climate change worsened the most destructive hurricanes of recent years, including Katrina, Irma and Maria, by intensifying rainfall by as much as 10%, new research has found. 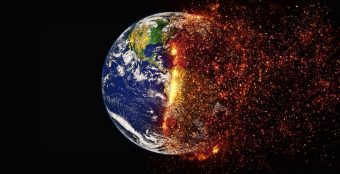 High-resolution climate simulations of 15 tropical cyclones in the Atlantic, Pacific and Indian Oceans found that warming in the ocean and atmosphere increased rainfall by between 5% and 10%, although wind speeds remained largely unchanged.

This situation is set to worsen under future anticipated warming, however. Researchers found that if little is done to constrain greenhouse gas emissions and the world warms by 3C to 4C this century then hurricane rainfall could increase by a third, while wind speeds would be boosted by as much as 25 knots.

“Climate change has exacerbated rainfall and is set to enhance the wind speed,” said Christina Patricola, who undertook the study with her Lawrence Berkeley National Laboratory colleague Michael Wehner. “My hope is that this information can be used to improve our resilience to the kinds of extreme weather events we are going to have in the future.”

The research, published in the journal Nature, used climate models to see how factors such as air and ocean temperatures have influenced hurricanes. Projections into the future were then made, based upon various levels of planetary warming.

The findings suggest that enormously destructive storms have already been bolstered by climate change and similar events in the future are on course to be cataclysmic.

In a world where temperatures were 3C warmer on average, Hurricane Katrina, which resulted in nearly 2,000 deaths when levees breached near New Orleans in 2005, would’ve been even worse, with around 25% more rainfall. Cyclone Yasi, which hit Australia in 2011, would have had around a third more rain, while the deluge during Gafilo, a huge storm that killed more than 300 people in Madagascar in 2004, would have been 40% more intense.

Jennifer Francis, a hurricane expert at Rutgers University, said: “This study adds exclamation points to the already clear message that we must slow global warming by conserving energy and switching from fossil to renewable fuels while preparing for more extreme weather to come.”

Hurricanes, or cyclones as they are known in the Pacific region, draw their strength from warmth in the upper layers of the ocean, while their rainfall is influenced by the amount of moisture in the atmosphere. Climate change, driven by human activity, is creating more favorable conditions for stronger hurricanes, with recent research finding that storms are intensifying more rapidly than they were 30 years ago.

Last year was the costliest hurricane season on record for the US, with $306.2bn in damage caused by a trio of category four storms – Harvey, Irma and Maria – which, respectively, drowned parts of Houston, rattled most of Florida, and decimated Puerto Rico. Two further major storms this year, Michael and Florence, caused widespread damage and dozens of deaths in Florida and North Carolina.

“Five or 10% more rain can make a big difference, the carrying capacity of stormwater systems in a town or city can be breached with that amount of extra rainfall,” said James Elsner, an atmospheric scientist at Florida State university.

Elsner said the study follows previous findings showing the climate change “fingerprint” on hurricanes. “There’s still discussion over the size of the affect but it’s clear,” he said. “We need to connect the dots after storms more than we have in the past. We know climate change is having an affect, the only real question is how much.”