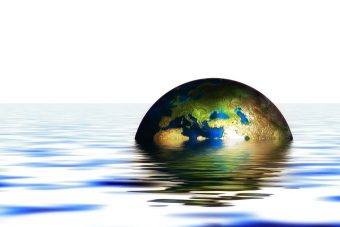 The citizens of four major European countries think the impacts of climate change such as severe floods and storms are already affecting them, according to a major new polling study.

The research dispels the idea that global warming is widely seen as a future problem, and also shows strong support for action to tackle global warming, including subsidies for clean energy and big financial penalties for nations that refuse to be part of the international climate deal signed in Paris in 2015 – as US president Donald Trump has threatened. There was also strong support for giving financial aid to developing nations to cope with the impacts of climate change.

Renewable energy was viewed very positively in all nations, but fracking had little support, with just 20 per cent of people seeing it positively in the UK, 15 per cent in Germany and nine per cent in France. Nuclear power was also unpopular: only 23 per cent of those in France, where it supplies the vast majority of electricity, have a favourable opinion.

Overwhelming majorities of people in the UK, Germany, France and Norway said climate change was at least partly caused by human activities, such as burning fossil fuels. But only a third thought the vast majority of scientists agreed with this, despite about 97 per cent of climate scientists doing so.

“It is encouraging to see that most people in this very large study recognise that climate change is happening, and that support for the need to tackle it remains high amongst the people we surveyed,” said Prof Nick Pidgeon at Cardiff University, who led the international project.

He said the firm backing of the public could be important in the light of Trump’s opposition to climate action: “With the recently shifting political mood in some countries, climate policy is now entering a critical phase. It is therefore even more important that the public’s clear support for the Paris agreement is carried through by policymakers across Europe and worldwide.”

Nick Molho, at the Aldersgate Group, a business alliance that lobbies for a sustainable economy, said: “The UK government should build on the existing public support for climate policies to put forward in the near future a clear plan to meet the emissions reduction targets.”

The polling study is the first in-depth climate change research in multiple European nations and involved interviewing more than 1,000 people in each country, with the results then weighted to be nationally representative.

The citizens gave near identical answers to the question of when the impacts of global warming would be felt, with 60 per cent answering that they were already here. At least two-thirds of them supported their nation being part of the Paris climate deal and they were at least two to one in favour of penalising countries that were not, perhaps via the border carbon taxes proposed by some French politicians.

“People see that if there are free riders, that is not a very good thing,” said Pidgeon. Earlier in March, the US state department snubbed the UN’s climate change chief when she requested a meeting.

Subsidising renewable energy with public money was popular, with 70 per cent support in the UK and Germany, 75 per cent in France, and 87 per cent in Norway. Increasing taxes on fossil fuels was supported in oil- and gas-rich Norway, but opposed two to one in France and Germany. In the UK, people were evenly split over tax hikes for fossil fuels.

Another split was in the trust people had in the European commission and national and local governments to transform their nation’s energy system to cleaner forms of energy. Germans were generally positive, but those in the UK had little trust in any of the institutions. The polling for the study took place in June 2016, before the Brexit referendum.