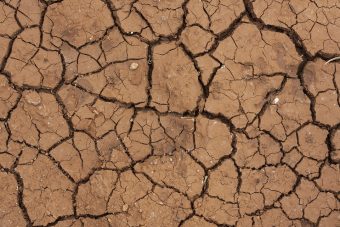 Droughts and heatwaves have reduced cereal harvests by an average of about 10% globally over the past half century, and their impact has become stronger in recent decades especially in developed countries, a study has found.

Climate change is expected to increase the risk of severe drought and extreme heat and now the first detailed analysis of global cereal production has shown that harvests of wheat, maize and rice have suffered greater losses since the 1980s from drought and heat compared to previous decades.

The findings question whether increased levels of carbon dioxide in the atmosphere are having a discernible “fertilising effect” on crop production that could outweigh the damaging effect on harvests caused by extreme weather events such as droughts and heatwaves exacerbated by global warming.

An analysis of national production of 16 different cereal crops in 177 countries, and a comparison with the effects of about 2,800 weather disasters between 1964 and 2007, has for the first time provided a detailed snapshot of how extreme weather has affected overall cereal production globally, scientists said.

The study found that drought and heatwaves reduced cereal harvests by between 9% and 10% on average in the affected countries. However, the technically advanced arable farms of North America, Europe and Australia were even more strongly affected than the developing world, with average production cuts of about 20%. 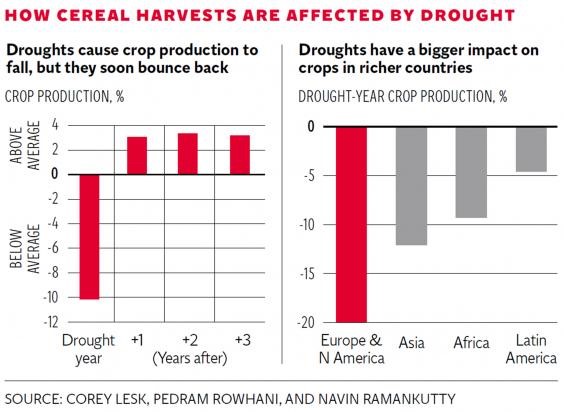 “We found that extreme weather disasters such as droughts and heatwaves substantially reduce crop production, and the impacts are worse in richer countries,” said Pedram Rowhani of Sussex University and a co-author of the study.

“The frequency and severity of these extreme weather events is expected to increase in the future. If we do not adapt our agricultural systems to become more resilient to these shocks we can anticipate even larger losses in the future,” Dr Rowhani said.

The analysis, published in the journal Nature, found that losses in average cereal producton caused by more recent droughts had increased in more recent years, with average reductions of about 13.7% compared to losses of about 6.7% prior to the mid-1980s. However, the analysis also showed that cereal production soon bounced back after a drought year.

“We have always known that extreme weather causes crop production losses. But until now we did not know exactly how much global production was lost to such extreme weather events, and how they varied by different regions of the world,” said Navin Ramankutty, professor of global food security and sustainability at the University of British Columbia in Canada, and senior author.

One of the most suprising findings was that advanced countries were apparently more susceptible to crop losses due to droughts and heatwaves compared to less advanced nations. This may reflect differences in scale and the farming methods employed in growing and harvesting cereals, the scientists said.

“Across the breadbaskets of North America, for example, the crops and methods of farming are very uniform across huge areas, so if a drought hits in a way that is damaging to those crops, they will all suffer,” said Corey Lesk of McGill University in Montreal, the study’s first author.

“By contrast, in much of the developing world, the cropping systems are a patchwork of small fields with diverse crops. If a drought hits, some of those crops may be damaged, but others may survive,” Mr Lesk said.

Farmers in wealthier countries rarely depend on harvests directly for food, and typically have dependable access to crop insurance in the event of bad weather, he said.

“So the optimal strategy for them may be to maximize yields rather than minimize the risk of weather-related crop damage.”