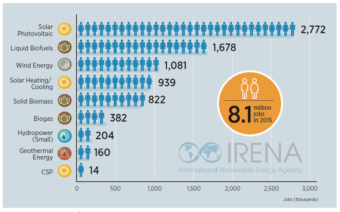 IRENA, the International Renewable Energy Agency, says the trend is clear. Jobs in clean energy industries like solar, wind, geothermal and hydroelectric are increasing while jobs in oil, natural gas, and coal extraction are decreasing worldwide. About 8.1 million people worldwide had jobs in the clean energy in 2015. That’s up from 7.7 million in 2014, according to the latest figures from IRENA.

The clean energy advocacy group, which is based in Abu Dhabi, says jobs in the solar industry in the US were greater than those in oil and gas extraction for the first time in 2015. Job creation in the solar sector grew 12 times faster than overall job creation.  By contrast, oil and gas producers slashed 351,410 jobs worldwide since prices began to slide in the middle of 2014, according to Houston-based Graves & Co.

“The continued job growth in the renewable energy sector is significant because it stands in contrast to trends across the energy sector,” said Adnan Amin, director-general of IRENA. “This increase is being driven by declining renewable energy technology costs and enabling policy frameworks. We expect this to continue as the case for renewables strengthens and countries move to achieve climate targets.” IRENA predicts there will be 24 million jobs in clean energy by 2030, driven in large measure by efforts to meet carbon reduction targets agreed to by all nations at the COP 21 summit in Paris last December.

In a trend little noticed by the mainstream press, renewable energy is starting to gain a foothold in rural America, the very place where Donald Trump support is strongest. People may disagree about climate change and what to do about it, but simple economics are driving a switch over to renewable energy in so-called red states like Texas, Oklahoma, and South Carolina.

Polls show that voters across all political fault lines strongly favor renewable energy. One such poll done by Hart Research on behalf of NextGen Climate Action shows that 70% of swing state voters support the goal of 50% clean energy by 2030, including 54% of Republicans. James and Deborah Fallows have been crisscrossing the country on behalf of the American Futures project. They say their task is “taking seriously places that don’t usually get registered seriously.”

What they are finding in their travels is that renewable energy projects in rural America are giving small town residents pride in their contribution toward green jobs and greener energy. People who make that pride part of their identity become more open to further action. Someday they may even come to see themselves as part of a larger struggle against climate change.