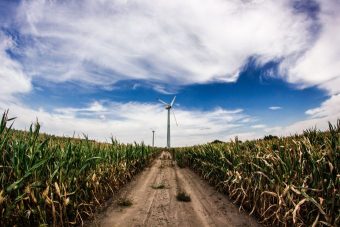 When we think of coal country in the United States, we think of West Virginia, Ohio, and Pennsylvania. But Wyoming is where the majority of American coal comes from. In fact, the Cowboy State, as it calls itself, produces four times as much coal as West Virginia. That also means it has suffered a devastating loss of coal mining jobs in recent years as the use of coal to make electricity has declined. Now a Chinese company wants to retrain some of those unemployed miners to work in the wind power industry.

Goldwind Americas is the US arm of one of China’s largest wind turbine manufacturers. Of all the states in America, Wyoming is one of the best suited for wind energy because it has high average wind speeds and lots of wide open spaces. Nevertheless, Wyoming has been hostile to wind power. It is the only state that levies a special tax on electricity generated by wind.

That hasn’t deterred Goldwind Americas, however. Last week at an energy conference in Wyoming, Goldwind offered to provide free training to unemployed coal miners looking for work building and maintaining wind power farms and wind turbine technicians. Free retraining for unemployed workers is more than the state government is willing to do for its citizens.

The company has plans to install hundreds of state-of-the-art wind turbines in locations all across Wyoming. “If we can tap into that market and also help out folks that might be experiencing some challenges in the workforce today, I think that it can be a win-win situation,” David Halligan, chief executive of Goldwind Americas, told the New York Times.

Goldwind believes miners, with their experience working under difficult conditions and their expertise in mechanical engineering, are well suited to work in the wind energy industry. There are billions of dollar in federal subsidies available for wind farms, and wind power is generally the cheapest source of electricity around. Goldwind hopes the lure of stable, well paying jobs will overcome the resistance in the state capital to wind power.

Certainly, nothing could be more counterintuitive than putting hurdles in the way of businesses that want to create jobs and favoring those that are shedding jobs. Wyoming lost another 6,000 coal jobs in the past year alone. But ideology is hard to overcome. The state’s leaders are bought and paid for by fossil fuel interests and do their bidding even when doing so means shooting themselves and their voters in the foot.

The cowboy mystique is all about self-reliance and success through hard work, both of which are laudable traits. But historically, cowboys didn’t succeed by being stupid, something the state’s leaders fail to realize. If Goldwind is successful, perhaps the state government will start representing the people it was elected to serve rather than corrupt corporate interests who want to damage the state’s economy by keeping it chained to the past.