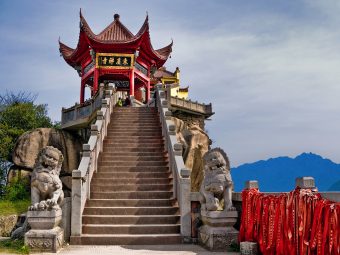 Over the past few years, China has made a major push to reduce carbon emissions by encouraging use of green technologies. Thanks to generous government incentives and fleet purchases, it is now the world’s largest market for plug-in electric cars. Construction of new solar and wind farms has also proceeded at a rapid pace.

But could that green-energy growth soon slow down?

Installation of new solar and wind farms is expected drop 11 percent in 2017, representing the first recorded decline in the history of the modern renewable-energy business, according to Bloomberg. The expected drop comes despite the industry reaching a record high in China this year.  It stems from stagnating electricity demand in China resulting from slowing economic growth, which the government expects to create excess electricity-generation capacity. The government is already “re-calibrating” subsidies for renewable energy, according to Bloomberg. Chinese renewable-energy policy is crucial to the industry as a whole because the country has been its single largest market for the past eight years.

China’s demand for solar panels and wind turbines has fueled industry growth, and large-scale renewable-energy projects have brought down the cost of both energy sources. Global renewable-energy capacity is expected to grow 17 percent in 2017, but that’s still the slowest amount of growth in at least a decade, according to London-based research firm BNEF. China’s wind and solar capacity is expected to increase 41.8 gigawatts in 2017, compared to 46.9 GW this year.

While the renewable-energy industry has come to rely on robust Chinese demand, it may be able to weather this slowdown without too much trouble. Analysts note that companies may be able to devote extra capacity developed for China to emerging markets, such as India, the Middle East, and Latin America. There’s also steady growth in more developed markets like North America, where price declines could make it possible for more households to install solar panels (if not personal wind turbines). Demand in China may also pick up again as new construction absorbs more of the current renewable-energy generating capacity. Because while China’s green-energy slowdown is remarkable, it is likely only a short-term phenomenon, noted Jules Kortenhorst, CEO of the Rocky Mountain Institute energy research firm. “China is committed to a low-carbon future,” he said.