Chernobyl in Ukraine is infamous for having been the site of a nuclear disaster in what was then the Soviet Union. For the past 30-odd years, since the catastrophic meltdown at the local plant in 1986, the area has been deemed unfit for human habitation. That has led to a resurgence of nature and wildlife in the contaminated area with wolves and bears having reclaimed local forest undisturbed.

But Chernobyl is now home to something else other than wild animals: a new solar farm. 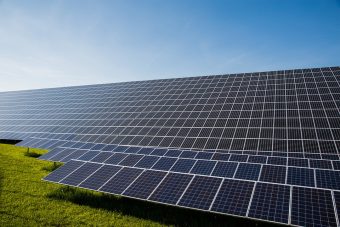 Oppose the decommissioned nuclear plant, which is encased in a giant sarcophagus to prevent radiation, sprawl the solar panels of a new 1 megawatt solar farm. The photovoltaic project dubbed Solar Chernobyl started operating on October 5, only about 100 meters from the old nuclear reactor.

Evhen Variagin, chief executive of the company Solar Chernobyl LLC, which is behind the project, stressed the symbolism of the selected location for the new solar farm.  “It’s not just another solar power plant,” Variagin insisted. “It’s really hard to underestimate the symbolism of this particular project.”

The farm, which cost €1 million and is a joint venture by the Ukrainian company Rodina and Germany’s Enerparc AG, ensures that the infamous site produces electricity again. The solar farm is expected to meet the energy needs of about 2,000 households. Plans are underway to boost the site’s capacity to 100 MW in future.

Ukraine is investing heavily in renewables, adding more than 500 megawatt of capacity between January and September this year, which is more than twice the capacity added all of last year.

Valery Seyda, head of the Chernobyl nuclear plant, has welcomed the new solar farm at the site. “Now we are seeing a new sprout, still small, weak, [but one that  is] producing power on this site and this is very joyful,” he enthused.