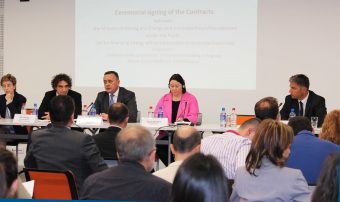 Minister of Mining and Energy, Aleksandar Antić and representatives of 13 local self-governments signed contracts on grant awards for co-financing energy efficiency projects in public buildings in these municipalities, on the premises of the United Nations Development Programme on Thursday, 20 April 2017. In total, 25 million RSD have been earmarked from the Budgetary Fund for Energy Efficiency and USD 500,000 from the Global Environment Facility (GEF).

Funds have been allocated according to the results of a public call for local self-governments announced by the Ministry of Mining and Energy in October last year.

Commission, composed of representatives of the Ministry of Mining and Energy and UNDP, chaired by the State Secretary, Mirjana Filipovic, supported by a technical consultancy provided by UNDP, have evaluated the received project proposals according to the set criteria, the most important of which is CO2 emission reduction upon project implementation. Thirteen best ranked projects, which met the requirements of the public call, have been selected.

GEF grant is provided through the project “Removing Barriers to Promote and Support Energy Management Systems in Municipalities throughout Serbia”, jointly implemented by the United Nations Development Programme (UNDP) and the Ministry of Mining and Energy, and funded by the Global Environment Facility (GEF) and UNDP with $ 2.5 million.

The purpose of the project “Removing Barriers to Promote and Support Energy Management Systems in Municipalities throughout Serbia”, which is to be implemented by December 2020, is to increase investments in energy efficiency in public buildings and public utility services, as well as to improve their energy and cost efficiency through professional management. Project will also work on improving the legislative framework and on building capacity for the implementation of energy management at central and local levels.

The Course of the Energy (R)Evolution in Germany