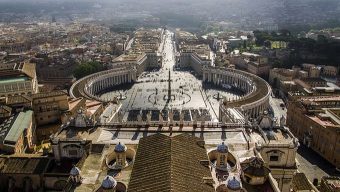 The global divestment movement gained a religious following today with the announcement that 35 Catholic institutions have pledged to remove fossil fuels from their investment holdings.

Humanitarian organisation Caritas Internationalis, three leading Catholic banks with balance sheets totalling around €7.5bn, several dioceses and an international coalition of Catholic institutions have today all joined together in pledging to drop investments in energy that drives climate change.

The Global Catholic Climate Movement, which coordinated the announcements, said the news demonstrated the growing strength of the divestment movement within the Catholic Church, with the pledges coming from institutions that connect directly with the hierarchy with the Vatican and are backed by a sizeable pool of institutional investments.

For example, as an official Church institution based in the Vatican, Caritas Internationalis is one of the largest humanitarian organisations in the world and several members of its executive board are directly appointed by the Holy See.

Caritas Internationalis president H.E. Cardinal Luis Tagle said the poor are “suffering greatly from the climate crisis and fossil fuels are among the main drivers of this injustice”. “That is why Caritas Internationalis has decided not to invest in fossil fuels anymore,” he said in a statement today. “We encourage our member organisations and other groups or organisations connected to the Church to do the same.”

Leading Catholic banks pledging to divest include Pax Bank, Bank Im Bistum Essen eG, and Steyler Ethik Bank, while the archdiocese of Luxembourg, the archdiocese of Salerno-Campagna-Acerno, and the diocese of Communauté Mission de France are also among those announcing divestments today.

Not all the institutions have yet revealed how much their divestments are worth. However, it is understood Secours Catholique in France plans to divest an estimated €10m, while the Catherine Donnelly Foundation will be divesting around CAN$800,000 and in the US a cluster of parishes – St. Pius, St. Mary, St. Anthony – are dropping an estimated US$400,000 from their total $3m assets.

The Archbishop of Luxembourg, Jean-Claude Hollerich, said bishops were increasingly committed to making financial decisions “in line with our moral values”.

“Divestment is an important way for the Church to show leadership in the context of a changing climate,” he said. “Praise be to all those who serve ‘the least of these’ by protecting the environment.”

The 35 institutions making the pledge to coincide with international Earth Day today join the 60 Catholic institutions which have previously divested from fossil fuels.