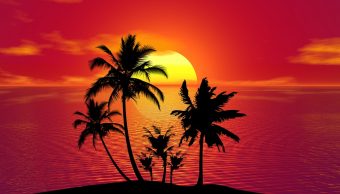 Temperatures seen during recent heatwave likely to become norm by end of century, according to comparison with ancient conditions.

Spiralling carbon dioxide emissions could give parts of Europe the kind of tropical climate that it has not experienced for millions of years.
Under these conditions, temperatures comparable to those seen during the recent heatwave are likely to become the norm by the end of the century.

Researchers from the University of Bristol investigated conditions found on Earth during the early Paleogene, a period 56-48 million years ago.
During this time in the planet’s history, carbon dioxide levels were around the same as those predicted for the end of the century because of the massive quantities of greenhouse gases that humans are pumping into the atmosphere.
As a result, the era is of great interest to climate scientists seeking to understand the impact of such high carbon dioxide levels.

Analysis of ancient peat fossils allowed the scientists to estimate temperatures 50 million years ago.
“We know that the early Paleogene was characterised by a greenhouse climate with elevated carbon dioxide levels,” said Dr David Naafs, an earth scientist at the University of Bristol. “Most of the existing estimates of temperatures from this period are from the ocean, not the land – what this study attempts to answer is exactly how warm it got on land during this period.”

The scientists found that annual land temperatures in Western Europe and New Zealand were between 23C and 29C – higher than first thought.
This is up to 15C higher than current average temperatures in these regions.
If the same conditions emerge in coming years it could have serious repercussions.

Professor Rich Pancost, one of the study’s co-authors said: “Our work adds to the evidence for a very hot climate under potential end-of-century carbon dioxide levels. Importantly, we also study how the Earth system responded to that warmth. For example, this and other hot time periods were associated with evidence for arid conditions and extreme rainfall events.”
Their results were published in the journal Nature Geoscience.

The recent heatwave that struck Europe was associated with wildfire across the region, and caused major disruption to agriculture and wildlife.
Experts in the UK warned that hundreds of people were likely to die as a result of the elevated temperatures, and a report by the Environmental Audit Committee warned that heat-related deaths will likely triple by the middle of the century.
Climate scientists found that the heatwave was made more than twice as likely by human-induced climate change.
The scientists behind the new research said there is also a need to investigate how ancient temperature increases affected the tropics, and whether temperatures in excess of 40C turned them into “ecological dead zones”.