All good ideas have something in common – it always appears to be some ever so logical and simple solution where such an idea found its implementation. The same goes for the innovation by local start-up Solagro. They made a crusher that grants points whenever you “feed“ it with a can. 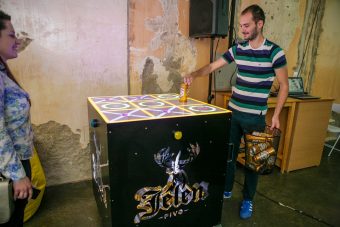 The crusher isn’t a new invention. Still, in Solagro design, it is substantially different. It was made to motivate users to recycle, and companies that take care of social responsibility to place it on their premises.

Marko Kalicanin and Nemanja Janic, a founding couplet of this team with the numerous innovators, have come up with an idea of valuating each can that user recycles after their experience with the first mechanical presses which they had made and placed at the festivals. Nemanja, the Solagro CEO, says that people respond in a positive way to otherwise somewhat sterile process of recycling if their effort is rewarded.

”Recycling is a generally hideous and repugnant task which we enhanced with an element of the game so that users might find it more interesting and inspiring. Based on our own experience, we know that a reward system forms a habit of separating and recycling the packaging that still prevails even when such an ’incentive’ is long gone.”

What rewards await those who diligently pop cans in the Solagro crusher, we asked Nemanja, and he pointed out that there is a variety of rewards. Still, it depends mainly onvisitors’ structure and the type of event where the crusher will be placed.

“The most appealing rewards are usually available at the most popular music festivals. It is up to the festival organizers to provide the rewards, with our assistance provided, whereas our start-up sets up the digital platform and the recycling system. The most wanted reward this year was undoubtedly an electric bicycle which we gave away on the Manifest festival. However, let me single out rides in an air balloon, helicopter and aeroplane, dinners at restaurants, theatre tickets, and weekends for two at the resorts in Serbia etc. And that isn’t all. The visitors had a chance to delight in ice-creams, beverages, but they were also getting books, toys etc.”

Along with Nemanja and Marko, the latter is in charge of research and development, their team comprises the developers Milos and Aleksandar, electronics technician Igor, and Tamara, who is the project manager. Originally, Solagro team contained 6 members, all of them were students of the last year at the Faculty of Agriculture at that time and the volunteers at the Public Utility Company “Gradske pijace” in Belgrade. Today, some of them hold a PhD degree, and others are skilled engineers for irrigation in Israel, bankers in Ecuador, or excellent alcohol technologist. At the same time, Nemanja and Marko set up Solagro following their vision.

When it comes to role distribution between the team members, according to Nemanja, that was a piece of cake. “Marko, although not a mechanical engineer, has a profound talent for device design. More than 200 of devices hitherto made, were designed and engineered by him. On the other hand, I am in charge of sales, negotiations, client relationship management and our presentations at the contests. Together we make a pretty good team, so the rest of the current team members just followed us in stride.“

More than a year ago their invention for can recycling found its way into the selection of the best 15 start-ups at the contest PowerUP!, being picked among three hundred innovations submitted from all over Europe. They arrived at the European finals of the contest PowerUP! in Prague as winners of the national contest held in May 2018 and organized by Startit. The finals and their presentation in Prague have contributed by and large to making valuable contacts and realizing West European market’s requisites when it comes to innovations in environmental protection so that smart crushers could be placed and marketed in those markets in an easier way.

After the finals of this contest in Prague, they showed up at the finals of another prestigious competition in Frankfurt called Clim@ competition, where they were selected among 12 finalists from all over the world. This year, thanks precisely to this competition, they got the support from Green for Growth (the organizer of the Clim@ competition contest) for campaign Smart Recycling in 2019. Also, at the beginning of 2018, they got the grant from the Innovation Fund of the Republic of Serbia through Early development programme to enhance further this system. In July 2018, they were among just a few Serbian start-ups who had a chance to present themselves at the Western Balkans summit in London. 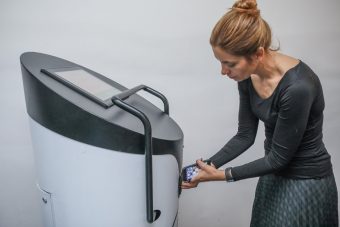 Today Solagro crushers are in use in nine European countries. The citizens of Belgium, Spain, Ireland, Greece, Romania, Austria, Montenegro, Slovenia and Croatia throw cans into the crushers, made by our innovative team, and from there, cans go directly to recycling, so that in 60 days they would be ready to go back on the shelves. Soon, the first smart crusher will make its way to Africa. Nairobi, Kenia’s capital, will get its first Solagro crusher, confirms Nemanja and adds that so far in our country their patent for can recycling has been used mostly at the festivals and other massively popular events.

“From the very beginning the start-up Solagro had a strategic partner in the Recan Foundation who has been helping our innovations first to see the light of day, and later supporting their implementation at numerous festivals in the country and abroad. Still, our ideal buyer would be a big company which deals in the packaging industry (e.g. Ball Packaging) but also all other bottling plants such as Coca-Cola, Heineken, Molson Coors etc”, says Nemanja sharing with us that their goal is to make a strategic part-nership with one of those big companies. “We have made it with Ball Packaging, the biggest can producer in the world.”

It is common knowledge that aluminium cans go through the recycling process countless times, without losing their quality. Discharging of crusher is a duty of a national operator such as Sekopak or the organization “Every can counts” whereas the income coming from the recycled material goes to the crusher owner, but mostly to the association “We live together”.

Innovations have marked the whole development process of the Solagro company. Nemanja affirms that they cooperated with the Public Utility Company “Belgrade City Markets” that resulted in placing one of biodigester for organic waste at one of the markets. “Ever since that, the inventions have just kept on coming. Those include solar power drier for fruits, vegetables and herbs, solar power oven for cooking in nature without smoke and fire, solar system for irrigation and smart crushers which are these days in demand but also other smart appliances for collecting packaging waste.“ Although they haven’t had time to develop all the patents fully, it is quite clear that they do not lack ideas and conceptions which might help the protection of the environment we all share.

We hope that their mobile crushers with the engaging appearance will become commonplace at cities’ squares, at various shows and other places where a lot of people get around. Naturally, while waiting for this creative team to amaze us with another of their designs which will allow us and facilitate waste recycling.