Climate campaigners are taking Norway’s government back to court to oppose its plans to open the Arctic for oil drilling despite a public commitment to tackle the environmental crisis. 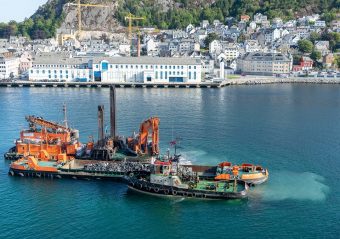 Greenpeace Nordic and Norway’s Nature and Youth organisation will appeal on Tuesday against the government’s decision to allow oil exploration in parts of the Arctic Ocean on the grounds that it violates people’s rights to a safe and healthy environment.

The green groups are expected to argue that the decision would breach a constitutional law, known as section 112, that calls on the government to safeguard a healthy environment for existing and future generations. They also claim the plans would violate the Paris climate agreement.

Total carbon emissions from the fossil fuel-rich country are forecast to climb by 16% this year compared with the year before, after oil companies drilled 130 oil and gas wells in 2019.

The campaigners claim Norway’s total exported greenhouse gas emissions are 10 times bigger than the domestic emissions from its production.

Frode Pleym, the head of Greenpeace Norway, said: “The Norwegian government can no longer ignore the dangerous impact its exported oil is having on the climate. Climate change knows no borders. Oil is oil, no matter where it is burned, and the government needs to cancel all drilling for new oil in the Arctic. Not acting now violates the Paris agreement and Norway’s own constitution. That is why we are back in court.”

The green groups first took the government to court in Oslo in 2017 after years of lobbying against oil exploration in the Arctic. The co-plaintiffs will have the backing of Friends of the Earth Norway and the Norwegian Grandparents Climate Campaign.

The appeal comes weeks after the UN special rapporteur on human rights and the environment, David Boyd, delivered a stinging rebuke of the Norwegian government’s oil expansion in a report calling for an end to the country’s search for new oil.

“Norway should stop exploring for additional oil and gas reserves, stop expanding fossil fuel infrastructure, and harness Norwegian wealth and ingenuity to plan a just transition to a fossil fuel-free economy,” he said.

Gaute Eiterjord, the head of Nature and Youth in Norway, said it was deeply concerning to see Norway’s government “bury its head in the sand”.

“It is the government’s obligation to safeguard a safe and healthy environment. The young generation, in Norway and all over the world, is worried about the prospect of an unsafe future,” he said.