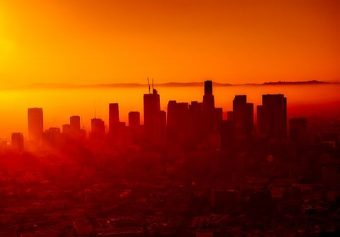 The state of California has again been named by the American Lung Association as the US state with the worst air quality — mostly as a result of having the highest ozone/smog levels out of any state in the country, but also high particle pollution levels.

What that means is that California has now ranked at the top of 17 out of 18 of the American Lung Association’s annual State of the Air reports. This reality is no doubt partly due to the fact that the state’s population has been growing fairly rapidly in recent years — it’s hard to reduce air pollution when every type of activity, from transportation, to agriculture, to climate control, keeps growing.

Another clear reason is the state’s heavy auto dependency and auto-oriented design, which results in a great deal of driving, traffic congestion, and pollution. It’s also home of Carmageddon.

The 3 worst regions in the US as regards smog levels are all in California, according to the report — with Los Angeles-Long Beach, Bakersfield, and Fresno-Madera topping the list.

“The Los Angeles basin is exposed to the highest ozone levels in the country,” noted Steve LaDochy, PhD, professor of geosciences and environment at California State University, Los Angeles, an expert in air pollution and climate. “It is getting better here, but it’s still the worst.”

The press release provides more: “The annual study ranks the cleanest and most polluted areas in the country by grading counties in the US based on harmful recorded levels of ozone (smog) and particle pollution. The 2017 report used data collected from 2013 to 2015.

“The air quality in the state was significantly better in northern California, found the report. Nonetheless, more than 90% of Californians still live in counties with unhealthy air. …

“LaDochy suspects that California’s continuously growing population is largely to blame for the state’s failing grades on ‘State of the Air’ reports and more residents is also behind the Central Valley’s recent drop in air quality, according to the report.”

LaDochy noted: “Population in (the Central Valley) has really bloomed; it’s nearly doubled. The coast is so expensive, so more and more people are moving to central California.”

To put numbers to that assertion … going by the figures provided by the US Census Bureau, the population of California has increased from 15.8 million (in 1960) to 39.2 million (as of 2016).