Barriers could halt slide of undersea glaciers and hold back sea level rises predicted to result from global warming.

Building walls on the seafloor may become the next frontier of climate science, as engineers seek novel ways to hold back the sea level rises predicted to result from global warming.

By erecting barriers of rock and sand, researchers believe they could halt the slide of undersea glaciers as they disintegrate into the deep. It would be a drastic endeavour but could buy some time if climate change takes hold, according to a new paper published on Thursday in the Cryosphere journal, from the European Geosciences Union.

Though the notion may sound far-fetched, the design would be relatively straightforward. “We are imagining very simple structures, simply piles of gravel or sand on the ocean floor,” said Michael Wolovick, a researcher at the department of geosciences at Princeton University in the US who described the plans as “within the order of magnitude of plausible human achievements”.

The structures would not just be aimed at holding back the melting glaciers, but at preventing warmer water from reaching the bases of the glaciers under the sea. New research is now being undertaken by scientists showing how the effects of the warmer water around the world, as the oceans warm, may be the leading cause of underwater melting of the glaciers.

Wolovick and his fellow researchers ran computer models to check on the likely impacts of the structures they believe would be needed, taking as their starting point the Thwaites glacier in Antarctica, which at 80-100km is one of the widest glaciers in the world.

They found that creating a structure of isolated columns or mounds on the sea floor, each about 300 metres high, would require between 0.1 and 1.5 cubic km of aggregate material. This would make such a project similar to the amount of material excavated to form Dubai’s Palm Islands, which took 0.3 cubic km of sand and rock, or the Suez canal, which required the excavation of roughly one cubic km.

Building a structure of this kind would have about a 30% probability of preventing a runaway collapse of the west Antarctic ice sheet, according to the models.

Using more complex designs that would be harder to accomplish in the harsh conditions on the sea bottom in the south polar regions, a small underwater wall could be built, which they calculate would have a 70% chance of succeeding in blocking half the warm water from reaching the ice shelf.

Glaciers melting under rising temperatures at the poles have the potential to discharge vast amounts of fresh water into the oceans, sending sea levels rising faster than they have for millennia. The Thwaites glacier alone, an ice stream the size of Britain and likely to be the biggest single source of future sea level rises, could trigger the melting of enough water to raise global sea levels by three metres.

Many of these glaciers extend far under the sea, and scientists have begun to explore their subsea melting as well as the easier-to-measure reductions in the or visible parts. The undersea research vessel now known as Boaty McBoatface after its much larger relative was named the Sir David Attenborough is to be deployed at the Thwaites glacier for just this purpose.

Building undersea walls could be accomplished by similar vessels but would have to be precisely positioned and strong enough to withstand the immense pressure of the ice.

The authors hope that by creating their experimental models they can foster future research into the engineering needed to bring about such projects, which would take many years or decades to be worked out and implemented.

Geo-engineering solutions such as this one should not deter the world from reducing greenhouse gas emissions, Wolovick said. “The more carbon we emit, the less likely it becomes that the ice sheets will survive in the long term at anything close to their present volume,” he said.

The forthcoming report from the Intergovernmental Panel on Climate Change is expected to warn afresh of the potential for sea level rises to inundate low-lying areas if warming is not held to 1.5C above pre-industrial levels. 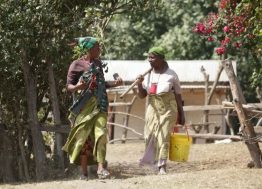 Harnessing Tech to Employ Last-Mile Tree Planters in a...