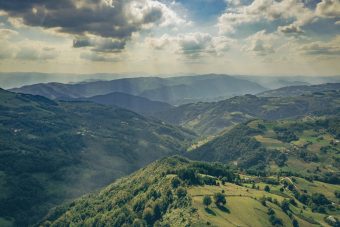 Hillsides are hidden sources of power just waiting to be unlocked, according to a British renewable energy company.

RheEnergise has developed a way to use hills as ‘batteries’ that create and store electricity for use when needed.

Instead of using water, RheEnergise has invented a fluid which is two and half times denser.

This means it can provide two and half times more power and energy when it is released downhill.

“Unlike conventional pumped hydro energy storage, a RheEnergise High-Density Hydro system can operate beneath small hills rather than mountains,” says the company on its website.

This, in turn, opens up many more sites as potentially suitable for this kind of hydropower system. Quicker and cheaper to build than traditional hydropower dams, the systems would also be more sustainable. The RheEnergise system operates on small hills, meaning there are more sites available for projects.

The high-density fluid is pumped uphill at times of low energy demand and stored in an underground storage tank. When extra electricity is needed, the fluid is released downhill over generating turbines. This way, the energy used to get the water uphill is returned to the grid.

So-called ‘pumped-hydro’ systems like these are one of the oldest forms of energy storage and traditionally use reservoirs and dams to store and release water.

They help bridge potential gaps in electricity supply when demand is high or production from the electricity grid drops. They also help offset the seasonality of variable renewables like wind and solar power.

While the pandemic has undoubtedly slowed down global renewable energy growth, electricity-generating technologies have proved fairly resilient, according to the International Energy Agency’s Renewables 2020 report.

The global energy storage market needs to grow 100 times its current size, according to Bloomberg New Energy Finance, which estimates the market will be worth in excess of $620 billion by 2040.

Pumped hydro accounts for about 96 percent of the world’s energy storage capacity. But as global energy demand continues growing, so does the need for more storage projects.

And these are coming in all shapes and sizes. One Swiss-based project is making use of concrete blocks to store energy.

RheEnergise says its system can work on hills with a height of 200 metres and is aiming to have its first commercial system operating in 2024, with a further 100 systems operating within the next decade.