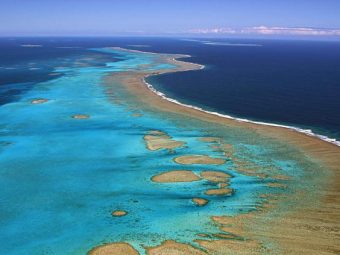 Carbon dioxide emissions may trigger a reflex in the carbon cycle, with devastating consequences, study finds.

In the brain, when neurons fire off electrical signals to their neighbors, this happens through an “all-or-none” response. The signal only happens once conditions in the cell breach a certain threshold.

Daniel Rothman, professor of geophysics and co-director of the Lorenz Center in MIT’s Department of Earth, Atmospheric and Planetary Sciences, has found that when the rate at which carbon dioxide enters the oceans pushes past a certain threshold — whether as the result of a sudden burst or a slow, steady influx — the Earth may respond with a runaway cascade of chemical feedbacks, leading to extreme ocean acidification that dramatically amplifies the effects of the original trigger.

This global reflex causes huge changes in the amount of carbon contained in the Earth’s oceans, and geologists can see evidence of these changes in layers of sediments preserved over hundreds of millions of years.

Rothman looked through these geologic records and observed that over the last 540 million years, the ocean’s store of carbon changed abruptly, then recovered, dozens of times in a fashion similar to the abrupt nature of a neuron spike. This “excitation” of the carbon cycle occurred most dramatically near the time of four of the five great mass extinctions in Earth’s history.

Scientists have attributed various triggers to these events, and they have assumed that the changes in ocean carbon that followed were proportional to the initial trigger — for instance, the smaller the trigger, the smaller the environmental fallout.

But Rothman says that’s not the case. It didn’t matter what initially caused the events; for roughly half the disruptions in his database, once they were set in motion, the rate at which carbon increased was essentially the same.  Their characteristic rate is likely a property of the carbon cycle itself — not the triggers, because different triggers would operate at different rates.

What does this all have to do with our modern-day climate? Today’s oceans are absorbing carbon about an order of magnitude faster than the worst case in the geologic record — the end-Permian extinction. But humans have only been pumping carbon dioxide into the atmosphere for hundreds of years, versus the tens of thousands of years or more that it took for volcanic eruptions or other disturbances to trigger the great environmental disruptions of the past. Might the modern increase of carbon be too brief to excite a major disruption?

According to Rothman, today we are “at the precipice of excitation,” and if it occurs, the resulting spike — as evidenced through ocean acidification, species die-offs, and more — is likely to be similar to past global catastrophes.

“Once we’re over the threshold, how we got there may not matter,” says Rothman, who is publishing his results this week in the Proceedings of the National Academy of Sciences.“Once you get over it, you’re dealing with how the Earth works, and it goes on its own ride.”