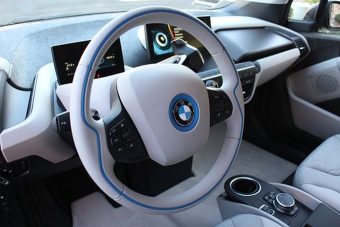 The Germany luxury auto manufacturer BMW has achieved its goal of selling at least 100,000 plug-in electric vehicles in 2017, the company revealed in an email sent to CleanTechnica.

The goal was achieved largely on the back of strong and growing demand in Western Europe and in the US — where the BMW Active Tourer PHEV (plug-in hybrid) and the BMW i3 sold decently.

Yes, as you can see, BMW is counting plug-in hybrids. It has several plug-in hybrid models. However, the BMW i3 still leads the way for the company.

To mark the occasion (the achievement of the goal), BMW’s headquarters tower was “transformed” on December 18th via a lighting installation to resemble “4 upright batteries” — meant to represent the company’s plans regarding plug-in electric vehicles.

“We deliver on our promises,” commented Harald Krüger, Chairman of the Board of Management of BMW AG. “This 99-meter-high signal is lighting the way into the era of electro-mobility. Selling 100,000 electrified cars in 1 year is an important milestone, but this is just the beginning for us. Since the introduction of the BMW i3 2013, we’ve delivered over 200,000 electrified cars to our customers and by 2025, we will offer 25 electrified models to our customers. Our early focus on electro-mobility has made this success possible — and electro-mobility will continue to be my measure for our future success.”

With regard to the 25 plug-in electric models on sale by 2025 that Krüger mentioned, the next model to be released will be the BMW i8 Roadster (an updated version of the earlier i8), followed by an all-electric MINI in 2019, an electric version of the X3 in 2020, and the iNext in 2021.

This news follows on recent announcement that the company would be spending €100 million or so on a new self-driving vehicle and electric vehicle test track, and also the news that BMW is partnering with the US-based firm Solid Power to develop commercial solid-state electric vehicle batteries.