It started as a trickle and now the floodgates are open. Solar arrays that once sat on barren ground are now festooned with plants that attract bees, birds, and butterflies. Even the US Energy Department is getting into the act. With that in mind, let’s take a look at four newly minted solar power plants that have built-in benefits for pollinators, too. 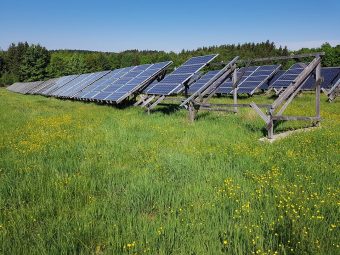 The natural hair care company Aveda already keeps beehives on its Blaine campus in Minnesota, and a new 3.6 acre, 900 kilowatt array of solar panels will enable it to add more hives because it is planted with pollinator-friendly plants, not gravel or ground cover. If that sounds like having your solar cake and eating it, too, it is.

The new array is also part of the company’s plans for generating more energy than it consumes.

Aveda was one of the first leading US manufacturers to dip into wind power, and the new foray into the solar + pollinator field puts it smack in the middle of a statewide, accelerating trend.

Here’s another way to look at the big picture: 900 kilowatts of renewable energy is small potatoes, but Aveda’s parent company Estée Lauder is roping in 22 megawatts of wind power for 2020 alone.

The city of Logansport, Indiana retired its ancient coal power plant a while back, and now the Logansport Municipal Utility is replacing it with the help of 16 megawatts worth of solar panels.

“Financed by a power purchase agreement (PPA), the solar installation will reduce LMU’s carbon emissions, help to stabilize energy costs for LMU’s customers, and also host a bee and butterfly habitat that will benefit agriculture in the surrounding area,” explains the developer, Inovateus Solar.

Logansport Municipal Utility partnered the organizations Fresh Energy and the Bee and Butterfly Habitat Fund to create a pollinator-friendly field. The new array will include a solar education element for local schools and a college scholarship for whoever comes up with the best name for the new solar park.

Of interest to tree lovers, the array will be surrounded with a buffer zone of native trees and other plants.

Speaking of having your cake and eating it, too, the PPA deal enables Logansport to get all those green goodies with no money down, thanks to a 30-year contract financed by the firm Alchemy Renewable Energy.

The solar + pollinator field is rapidly maturing, and as more results trickle in the case for new projects grows.

Back in 2017, the solar developer Green Lantern Solar partnered with Bee the Change to build a pollinator-friendly solar array in New Haven, Vermont. The project garnered praise from the Pollinator-Friendly Solar Initiative at the University of Vermont, and now the partners are back at it again with a second solar installation in New Haven.

The two arrays step up the pollinator game for Green Lantern. The company used to rely on clover for ground cover, which is all well and good, but the new arrays support far more pollinator diversity with dozens of different species of plants.

In terms of industry-wide influence, this next one is probably the most significant. Last month The GIANT Company put the finishing touches on a 7-acre field of solar panels at its corporate headquarters in Carlisle, Pennsylvania.

GIANT lives up to its name. Coming up on its 100-year anniversary in 2023, it blankets Pennsylvania, Maryland, Virginia, and West Virginia with hundreds of grocery stores,  pharmacies, fuel stations, and online pickup hubs in addition to grocery delivery services.

The GIANT headquarters already sports a rooftop solar array, but rooftop solar is old hat. The new solar array gives GIANT bragging rights to be the first major grocery retailer in the nation to dip in to the solar panels-plus-pollinators field, and it also supports the connection between food retailers and agricultural health. Ernst Conservation Seeds is the company that will populate the new array with pollinator-friendly plants.

If this is beginning to sound like agrivoltaics, run right out and buy yourself a cigar. Agrivoltaics is a new field that aims at designing low-impact solar arrays that are compatible with agriculture, including livestock and food crops in addition to pollinator habitats.

So, what does the Energy Department have to do with agrivoltaics? Plenty! The GIANT Company is participating in a major nationwide, 20-state solar-plus-pollinators project under the agency’s National Renewable Energy Laboratory.

Called InSPIRE for Innovative Site Preparation and Impact Reductions on the Environment, the project connects NREL and Argonne National Laboratory with other stakeholders in academia and local governments as well as environmental and clean energy organizations, with funding from the DOE Solar Technologies Office.

Part of the aim is to conserve land for food production while also enabling farmers to benefit from the cash flow of renewable energy.

In addition, the InSPIRE project dovetails with two other overlapping initiatives that DOE is heavily promoting, community solar and commercial-scale solar. The agency is aiming at 100% community solar access for every household in the US by 2025 (yes, for real), and the commercial-scale initiative has the aim of tapping into the underdeveloped middle ground of the solar market.

There is also an interesting connection with solar cell efficiency. Evidence is growing, so to speak, that agrivoltaic solar arrays benefit from the cool microclimate under the solar panels, and as everybody knows, solar cells function more efficiently when they are cool — even on Mount Everest, as the case may be. That’s a win-win for livestock farmers, whose stock can benefit from the additional shade.

Hold on to your hats, this whole thing could blow up quickly. It’s not just the small-scale solar developers that are getting into the agrivoltaic act. The global solar developer Lightsource, which is now part of BP, has a whole package dedicated to solar panels with farmer benefits.