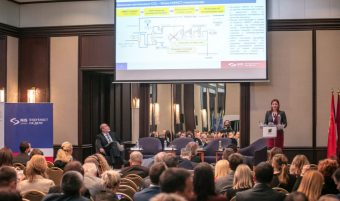 At the 15th Belgrade Stock Exchange International Conference “Upgrade Belgrade 2016“ NIS showcased its accomplishments in natural gas production and inaugurated its Amine Plant, which was put on stream this year within the Plant for Preparation and Transportation of Oil and Gas in the town of Elemir.

Amine Plant is intended for boosting the quality of local natural gas, which is attained by the capture of carbon dioxide and other gaseous impurities. The technology employed in its operation is dubbed HiPACT, which stands for High Pressure Acid gas Capture Technology, being a state-of-the-art method in gas processing, and a unique in its kind in Europe.

Being a socially responsible company, by investing 30 million euros in the Amine Plant NIS has achieved a double effect – in addition to improved gas quality and its volume, the operation of this modern plan has a positive environmental impact reflected in preventing carbon dioxide emissions into the and brings about major savings of thermal and electrical power.

Operation principle of the Amine Plant was demonstrated at this conference by Mirjana Ostojić, an expert from NIS Exploration and Production, who used the opportunity to point out that the company outputs a gas of the quality equal to the one being imported from Russia, as well as that NIS this way strengthens Serbia’s energy stability.

This year again NIS is in the capacity of a general sponsor to Belgrade Stock Exchange International Conference, which gathers major companies and financial experts from Serbia and the region.