Bees have developed a likening to pesticide-containing plants, according to a recent study. The affinity exhibited by the bees is similar to an addiction to nicotine from cigarettes. Apparently, the more pesticide-laced pollen that the bees ingest, the more they crave the tainted alternatives. The contaminated nectar is potentially harmful to bees and unfortunately, researchers are finding higher quantities entering bee colonies than before. 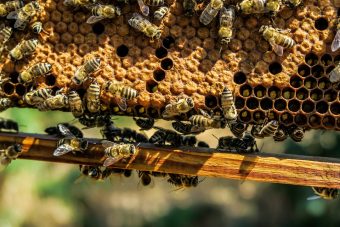 To reach these conclusions, a British research team conducted a series of studies over 10-day periods, offering 10 different bee colonies access to both pure sugar solutions as well as a compound that contained neonicotinoids, or neonics. Over extensive exposure, the bees increasingly preferred the sugar flavored with pesticides over the natural alternative.

“Interestingly, neonicotinoids target nerve receptors in insects that are similar to receptors targeted by nicotine in mammals,” explained Richard Gill, researcher in the Department of Life Sciences at London’s Imperial College. “Whilst neonicotinoids are controversial, if the effects of replacements on non-target insects are not understood, then I believe it is sensible that we take advantage of current knowledge and further studies to provide guidance for using neonicotinoids more responsibly, rather than necessarily an outright ban.”

Researchers will continue to experiment with the bees, according to lead scientist Andres Arce, part of the same Imperial College department as Gill. “Many studies on neonicotinoids feed bees exclusively with pesticide-laden food, but in reality, wild bees have a choice of where to feed,” Arce said. “We wanted to know if the bees could detect the pesticides and eventually learn to avoid them by feeding on the uncontaminated food we were offering. We now need to conduct further studies to try and understand the mechanism behind why they acquire this preference.”

The extensive research will have major implications for agriculture practices in the EU as well as North America. The EU already imposed a partial ban on neonics in 2013 after evidence found that they may have an adverse effect to bee colonies. As of today, the ban has been extended to all crops that are not grown in greenhouses. Canada has already moved to ban the pesticide this year, with the U.S. following suit in the near future.