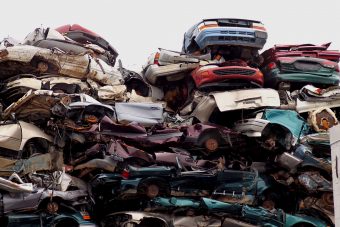 The increasing importance of batteries for electric cars, renewable energy, and consumer electronics has researchers looking for alternatives to the currently-dominant lithium-ion chemistry.

But could one of those alternatives be a combination of junkyard scrap metal and household chemicals?

That’s what a group of researchers are proposing, in the hope of making better use of these discarded materials.

A team from Vanderbilt University constructed a working battery by placing scraps of steel and brass in a glass jar, and added potassium hydroxide, an inexpensive salt used in laundry detergent.

They claim the resulting battery can store energy at levels comparable to conventional lead-acid batteries, and can charge and discharge at rates comparable to current supercapacitors.

As described in a paper published in the journal ACS Energy Letters, the key to this junkyard battery is anodization of the metal components.

Anodization is a chemical treatment, commonly used on aluminum, to provide a durable finish to metal.

When scraps of steel and brass are anodized by a combination of chemicals and electrical current, researchers found that their surfaces were restructured into “nanometer-sized networks of metal oxide.”

These surfaces can store and releasing energy when reacting with the battery’s water-based liquid electrolyte.

Because the electrolyte is water-based and thus non-flammable, the researchers noted that combustion is not an issue, as it can be with lithium-ion batteries.

In tests, the battery retained 90 percent of its initial capacity after 5,000 charging cycles, researchers said.

The research team was inspired to undertake this unusual project by the “Baghdad Battery,” which many consider to be the world’s oldest battery.

It consisted of a ceramic terracotta pot, a copper sheet, an iron rod, and some form of electrolyte, according to common interpretations of its design.

As with most battery research projects, it’s worth noting that the steel-brass scrap battery’s performance in the laboratory may not translate into results that are applicable in the real world.

The research team plans to continue working on the concept, including building a full-size battery that can provide power to an energy-efficient “smart home.”

The team’s goal is not commercialization, said Cary Pint, assistant professor of mechanical engineering at Vanderbilt and project boss.

Instead, researchers want to create a “clear set of instructions that can be addressed to the general public,” he said.