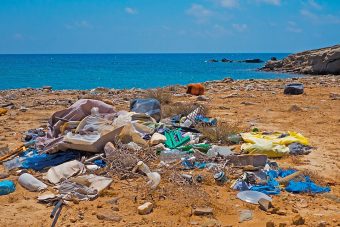 That’s according to a new report published by BP, which says a worldwide ban on the use of plastics for packaging and other single-use purposes from 2040 onwards would lead to lower than anticipated demand for oil.

In 2017, single-use plastics accounted for more than a third of plastic products produced.

However, the study suggests sourcing, producing and transporting alternative types of packaging from paper and aluminum would require more energy and be likely to result in increased carbon emissions elsewhere in the economy.

BP also expects global energy demand to grow by around a third up to 2040, with Asia forecast to drive much of this increase.

The energy giant predicts as much as 85% of this growth could be delivered by renewables and natural gas, with clean energy generation becoming the largest part of the global capacity mix by 2040.

It says global coal demand will remain flat, while oil demand will grow for the next decade before plateauing, meaning carbon dioxide emissions from energy use are likely to grow by 7% up until 2040.

Despite these sources of electricity then phasing out, this would mean the global efforts to meet the emissions reduction obligations outlined in the Paris Agreement would fail.