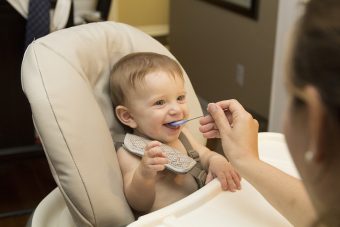 They found that every product they tested had measurable amounts of cadmium, inorganic arsenic or lead, that 68 percent had “worrisome” levels of at least one heavy metal and that 15 of the foods contained enough to constitute a health risk for a child eating one serving or less a day. Foods containing rice or sweet potatoes were especially impacted and there was no difference between organic and non-organic options.

Heavy metal consumption can have an outsized impact on children’s health cognitive development because they are smaller, their organs are still developing and they absorb more of the metals they consume than adults do. But CR Chief Scientific Officer James Dickerson advised parents not to panic.

“The heavy metal content in baby and toddler foods is a concerning issue but not an imminent threat,” he said. “The risk comes from exposure over time, and the risk can be mitigated. Making changes to your child’s diet now can reduce the chance of negative outcomes in the future.”

Since rice products were the most likely to have worrying amounts of inorganic arsenic, and rice absorbs 10 times the arsenic from contaminated soil compared to other grains, CR advised that parents limit their children’s intake of rice cereals, and swap them out for cereals made of other grains, like oats.

When parents do serve rice, CR recommended white basmati rice from California, India and Pakistan and sushi rice from the U.S. cooked in six to ten parts water per one part rice.

While the test was designed to sample the whole market and not single out particular products, CR did publish serving limits for some known products.

For example, it recommended limiting servings of Gerber Chicken & Rice and Gerber Turkey & Rice to less than one per day and servings of Beech-Nut Classics Sweet Potato to less than 0.5 servings a day.

However, not everything should have to fall on parents. The findings also highlight the fact that the Food and Drug Administration (FDA) does not yet regulate and test baby foods more thoroughly than adult foods.

But CR would eventually like to see them move to set and enforce a target of zero heavy metals in infant foods.

“In about a third of the products we tested, the amounts of heavy metals were below our level of concern, and for some of the products, amounts of some metals were not measurable,” CR Director of Food Safety Research and Testing James E. Rogers said. “Every category of food we tested was represented in that lower-risk group. That indicates that there are ways for manufacturers to significantly reduce or eliminate these metals from their products.”