Parents might want to think twice before pushing their babies in strollers alongside busy streets. 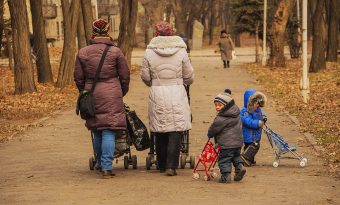 A study published Aug. 10 in Environment International by the Global Centre for Clean Air Research (GCARE) at the University of Surrey found that babies pushed in strollers can be exposed to up to 60 percent more air pollution than adults.

“We know that infants breathe in higher amounts of airborne particles relative to their lung size and body weight compared to adults. What we have proven here is that the height most children travel at while in a pram increases the likelihood of negative impacts from air pollution when compared to an adult,” study author and GCARE Founding Director Professor Prashant Kumar said in a University of Surrey press release. “When you also consider how vulnerable they are because of their tissues, immune systems and brain development at this early stage of their life, it is extremely worrying that they are being exposed to these dangerous levels of pollution.”

Infants travelling at that height can be exposed to particulate matter, black carbon, nitrogen oxides and toxic metals.

The study did not compare different stroller types, but Kumar told BBC News that parents could reduce their children’s exposure by using stroller covers and avoiding streets that got lots of car traffic.

The study also recommended a variety of solutions, from building hedges between sidewalks and cars, reducing emissions overall and designing strollers that created a “clean air zone” around the child’s nose and mouth.

But Royal College of Paediatrics and Child Health Professor Jonathan Grigg, who was not involved with the research, had a more far-reaching solution in mind.

“To help protect children’s health we must promote alternatives to cars fuelled by petrol and diesel,” he told BBC News.

The study comes as concerns about the impact of polluted air on children’s health in the UK have been growing.

In July, newly revealed documents surrounding the death of a nine-year-old girl from asthma in 2013 showed her attacks were associated with spikes in illegal air pollution levels near her London home. While air pollution in the UK is linked to 40,000 premature deaths a year, hers could be the first officially listed as such on her death certificate.

Kumar hoped his research would further discussion of this urgent issue.

“With the multitude of evidence we set out in this review, it is important that everyone across the country begin a full and frank conversation about pollution and the impact it has on our most vulnerable–from parents and community leaders, to government officials and industry,” he said in the university press release.