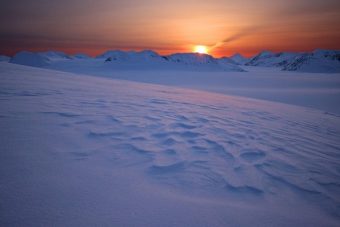 Climate scientists have been warning us for decades that global warming will affect polar regions first. If that is so — assuming those scientists are not all being paid by the Chinese to perpetrate a giant fraud on the world — then the latest reports from Alaska should be truly alarming. In December, 2017, the average temperature in Alaska was 19.4° F according to a report from NOAA. That’s 2.1º F more than the previous high temperature record set in 1985. For the month, Alaska was a startling 15.7º F warmer on average when compared to data going back to 1925.

“That’s really quite astonishing,” Rick Thoman, the National Weather Service’s climate sciences and services manager for the Alaska region tells the Anchorage Daily News. “Usually you’re breaking those by a tenth of a degree or two tenths of a degree.”

“Alaska, of course, being the only Arctic part of the U.S. — we are the U.S.’s canary in that coal mine.” But are any of America’s political leaders listening to what the canary is saying? The alleged president still insists climate change is a hoax cooked up by China. The head of the EPA is pedaling furiously to help out his friends in the oil patch. Lisa Murkowski, one of Alaska’s two senators, recently withheld her support for the tax bill until the federal government promised to open the Alaska National Wildlife Reserve to oil and gas drilling.

Trump is constantly beating his gums about terrorists. But what else can you call people who knowingly place the people they represent at risk of shorter life spans fraught with a higher number of health challenges? Aren’t they the real terrorists? Shouldn’t our leaders tell the truth and if they don’t, shouldn’t they be impeached for violating their oath of office? What could amount to “high crimes and misdemeanors” other than lying about things that will have such a dramatic impact on so many people?

Thanks to Fox News, Rush Limbaugh, Breitbart, and other fake news outlets propped up by fossil fuel money, everyone in America is at risk from the impact of a warming climate. When are Americans going to throw open their windows and shout out, “We’re mad as hell and we’re not going to take it anymore?” Maybe when the seas close over Mt. Rushmore.

There will be some who protest that my views are too extreme. For them, I offer two quotes that are near and dear to my heart and inspire me on a daily basis. The first is from Elie Wiesel: “There may be times when we are powerless to prevent injustice, but there must never be a time when we fail to protest.” The second is from an anonymous source but it sums up my position perfectly: “Activism is equal parts love and anger.”