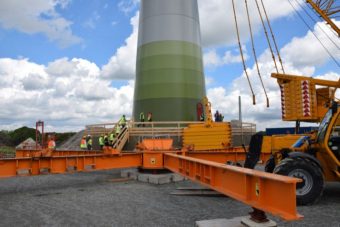 The small town of Bruck an der Leitha 45 kilometers southeast of Vienna is at the forefront of Austria’s drive for renewable energy. Its latest venture involves 52 local investors in an innovative cooperative project. Organic farmer Friedrich Metzker is proud of his investment. “In 2000, we switched to organic farming to produce fruits and vegetables in a more sustainable way,” he says. “Since then we are using renewable energy for our work and also in our personal lives. Organic farming and renewable energy fit just perfect.”

The first Bruck wind farm in 2000 was intended to move the town toward fully renewable energy usage. Bruck set up a non-profit organisation to develop three major renewable energy sectors—a biogas plant, biomass district heating, and wind parks. “The most recent wind energy project has created approximately 20 jobs,” says Michael Hannesschläger, the wind parks’ manager. “That’s remarkable at a time when employment is falling as a result of increased retail competition from Vienna.”

The 12 turbines with a total power of 36 MW produce clean energy for 27, 000 households. The latest deal is financed with a loan backed by the Investment Plan for Europe, the EU scheme implemented by the European Investment Bank that’s intended to trigger EUR 315 billion in additional investment over three years. The Plan allows the EIB to make investments it might not have made in years past. In this case, it is able to take on a larger portion of the deal. “This is the first Investment Plan project that we financed in Austria,” says Melchior Karigl, a renewable energy expert at the European Investment Bank. “Given it is a clean energy investment, we could support the project with a higher amount of EIB financing that’s almost 75 % of the total project cost.” 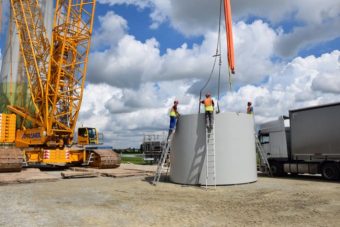 The project is the fruit of 52 local shareholders who organized themselves in a private limited partnership. This local factor may have a positive effect on the acceptance of wind farms in the region. A quarter of the investors are farmers and the average investment was about EUR 100 000. “At the EIB, we often work with larger corporates, but here the Investment Plan allowed us to support a group of small entrepreneurs and to take on more project risk than in previous onshore wind transactions,” says Karigl. “This brings high value added.”

Energiepark Bruck Leitha GmbH is also an investor. The company has already implemented six wind farms in the area with a total capacity of 147 MW. “The engagement of the EIB played a significant role in making this project come true especially in terms of risk minimization,” says Hannesschläger. “It makes sense as a small company to think out of the box and to apply for European funding.”

The community now takes a lot of pride in what they call “their windfarm.” All the energy is sold to the grid, because of the legal framework in Austria. Green-funded wind power is bought by a state-owned organisation, which is responsible for the commercialisation of green power on the free market. “We are proud of it,” says Metzker, the farmer.

Austria has a commercially and politically favourable environment for renewable energy installations, which has led to the achievement of significant cost and carbon savings across the country. A “feed-in tariff” introduced in 2002 means that each kWh of renewable electricity generated is purchased by the local power company at a set price. The tariffs were high enough to make many renewable energy systems commercially viable.

The uptake was more than twice as high as the government had expected. As a result in 2006 the government exceeded its renewable electricity target of 4% to provide 8% of electricity from renewable energy.  “More than 15% of Austrian installed capacity in wind power is situated in our region,” says Hannesschläger. “The high share of local investors leads to a high level of identification with the wind power and renewable energy in general.”