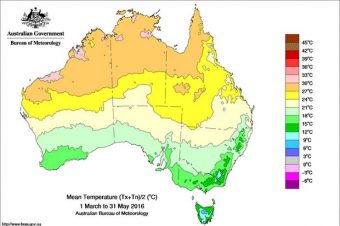 The mean temperature between March and May was 23.86C but winter could be cooler than normal as El Niño wanes.

After officially sweltering through the warmest autumn on record, Australians can expect a return to normal chilly weather this winter.

The mean temperature between March and the end of May hit a fresh high of 23.86C, with records set in Queensland, NSW, Victoria and the Northern Territory.

Thermometers hovered 1.86C above average, the biggest climb above an average seasonal temperature since spring 2014.

Some of the hottest temperatures were recorded during the prolonged heatwave in March, with Mardie in Western Australia’s north hitting 47C, the Bureau of Meteorology said.

Karl Braganza, the bureau’s manager of climate monitoring, said a strong El Niño combined with global warming to push thermometers to their highest levels for autumn since records began in 1910.

“Everywhere except the southwestern corner of the continent was exceptionally warm,” he told AAP on Wednesday.

“What we saw was a prolonged summer period in March and that continued into the start of May.”

March notched up its hottest days on record, with daytime temperatures in April hitting new highs before May ended the season with temperature gauges sitting above average.

Sea surface temperatures were also above average for much of autumn, with water temperatures in the Coral Sea (including the Great Barrier Reef) and the Tasman Sea the highest on record for extended periods since late summer 2016.

This was typical of the El Niño pattern which also brings dry conditions across the continent.

But scientists believe El Nino was now over in the Pacific region and the bureau forecast a normal winter.

“The odds are for average to below average temperatures in Sydney, Melbourne, Brisbane and Canberra,” Braganza said, adding that there were moderate odds for good rain in inland NSW, most of Queensland, Victoria and South Australia this winter.

Autumn rainfall averages were closer to normal, but varied significantly across the country.

It was also the wettest May since 1983 in some areas, with four times the average rainfall recorded in the Northern Territory, Cape York, Pilbara, Kimberley and central South Australia.

Looking towards spring and summer, cooler and wetter conditions are tipped for the tail end of 2016 as a La Nina weather system develops.