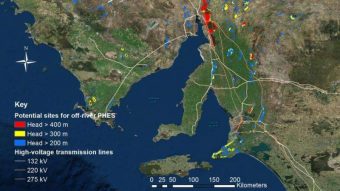 Pumped hydro power, where water is pumped uphill and stored to generate hydroelectric electricity on demand, could help transform Australian into a 100 percent green energy nation, according to researchers at the Australian National University (ANU) on Monday.

Currently, renewable energy accounts for around 15 percent of Australia’s electricity generation while two-thirds comes from coal-fired power stations, but according to Professor Andrew Blakers from the ANU Research School of Engineering, pumped hydro storage – in addition to current wind and solar power generation – could transform Australia into a fully green nation.

“With Australia wrestling with how to secure its energy supply, we’ve found we can make the switch to affordable and reliable clean power,” Blakers said in a statement released on Monday.

“Most existing coal and gas stations will retire over the next 15 years, and it will be cheaper to replace them with (renewable energies),” he said.

The team at the ANU has researched the potential of “short-term off-river pumped hydro energy storage” (STORES) sites, which are essentially a pair of reservoirs, typically 10 hectares each, separated by an altitude difference of between 300 and 900 meters.

The reservoirs are joined by a pipe with a pump and turbine, and water is circulated between the upper and lower reservoirs in a closed loop to store and generate power. Blakers said the technology was cheaper than coal and gas-powered power, while colleague, Dr Matthew Stocks said the technology had a minimal impact on the environment, while also requiring “much less water” than power generated by fossil fuels.

“This hydro power doesn’t need a river and can go from zero to full power in minutes, providing an effective method to stabilize the grid,” he said on Monday.

“The water is pumped up from the low reservoir to the high reservoir when the sun shines and wind blows and electricity is abundant, and then the water can run down through the turbine at night and when electricity is expensive.”

The ANU believes there are “hundreds” of sites where the technology could be used, with hills and mountains stretching from Far North Queensland down to South Australia, Victoria and Tasmania.