Atmospheric carbon dioxide levels in the atmosphere are forecast to soar through 2019. 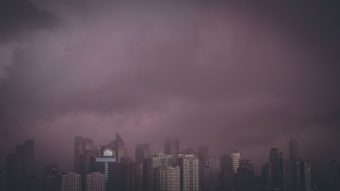 That’s according to the Met Office. which expects the continued burning of fossil fuels, the destruction of forests and a return towards El Niño-like conditions to lead to an average rise in carbon dioxide concentrations of 2.75 parts per million.

This would bring global average carbon dioxide levels up to 411 parts per million – this contrasts with the amount of the polluting greenhouse gas in the atmosphere before the industrial revolution, which was 280 parts per million.

Levels of the greenhouse gas have not been as concentrated as they are today for around five million years, with the past four years having been the hottest ever recorded.

The forecast rise would put 2019 among the highest annual rises since accurate records began.

Professor Richard Betts, from the Met Office, said: “Looking at the monthly figures, it’s as if you can see the planet ‘breathing’ as the levels of carbon dioxide fall and rise with the seasonal cycle of plant growth and decay in the northern hemisphere.”