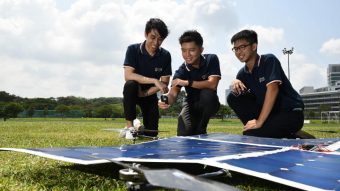 In April, a group of students from the Innovation & Design Programme (iDP) at National University of Singapore Engineering developed a quadcopter drone that is powered completely with solar energy, without the need for batteries or other energy storage. In test flights, the aircraft has flown to a height of ten metres and up to a duration of two minutes. This feat is a first in Asia.

Since 2012, different groups of students from the iDP, under the supervision of NUS Electrical and Computer Engineering Associate Professor Aaron Danner, have been working towards building a fully solar-powered quadcopter drone. The first prototype in 2012 achieved only 45 per cent of flight power from solar cells.

“Our aircraft is extremely lightweight for its size, and it can fly as long as there is sunlight, even for hours. Unlike conventional quadcopter drones, our aircraft does not rely on on-board batteries and hence it is not limited by flight time. Its ability to land on any flat surface and fly high off the ground in a controlled way also makes it suitable for practical implementation,” said Assoc Prof Danner. 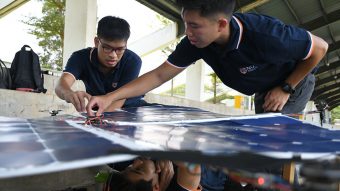 The current prototype was constructed using lightweight carbon fibre, has a surface area of about 4sqm and only weighs 2.6kg in total. It is fitted with 148 individually characterised silicon solar cells and supported by a frame equipped with four rotors. It can be controlled by remote control, or programmed to fly autonomously using a GPS system installed on the aircraft.

“Our aircraft is extremely lightweight for its size, and it can fly as long as there is sunlight, even for hours. Unlike conventional quadcopter drones, our aircraft does not rely on on-board batteries and hence it is not limited by flight time. Its ability to land on any flat surface and fly high off the ground in a controlled way also makes it suitable for practical implementation.”

The many crash landings of their various prototypes throughout the duration of the project were the most memorable part of the experience. Mr Goh commented that they had to “crash to learn”.

“Through each crash we learnt something; like maybe this joint is not done properly, this solar cell is not mounted properly, and the suitability of the flight controller we used,” he added. 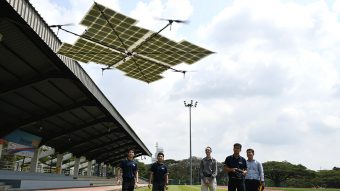 “We encountered many engineering challenges when building the drone,” shared Mr Yeo. “These included finding an optimal number of solar cells efficient and light enough to power the propulsion system, which in turn had to be light and at the same time able to produce sufficient thrust to lift the aircraft. Other issues we faced included tuning and calibration of flight controls to enhance flight stability, as well as designing a frame that is lightweight yet sufficiently rigid.”

Using solar energy as a power source for the drone has multiple advantages. The drone is not limited by the size and capacity of a battery or fuel tank; in contrast to many battery-powered drones that can often only fly continuously for about 30 minutes before needing charging, said Assoc Prof Danner. A solar-powered drone could thus potentially be able to fly as long as there is sunlight, fly itself to faraway destinations, recharge itself during the flight and would not need to operate within range of an airbase.

With these advantages, the team sees this aircraft potentially used as a ”flying solar panel” to provide emergency solar power to disaster areas, as well as for photography, small package delivery, surveillance and inspection. Batteries could also be added to power the aircraft when there is no sunlight, or for charging. Other hardware such as cameras could also be incorporated for other applications.

The current aircraft is proof-of-concept that a fully solar powered quadcopter is a possibility, Assoc Prof Danner said. In the future, the team will continue to fine-tune the aircraft, further improving its flight time and duration. They are currently sourcing for better solar cells and looking into ways to reduce the size of the aircraft. The team also hope to build a spin-off company and bring the technology closer to commercialisation in the future.