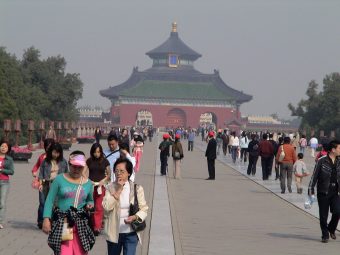 China is on track to record its fourth year in a row of flat or reduced greenhouse gas emissions, according to a new analysis by Greenpeace’s East Asia office.

The campaign group today published an investigation of official forecasts from China’s National Energy Administration, detailing how the government is expecting to see carbon emissions fall by around one per cent this year.

Any reduction in China’s emissions would come well ahead of schedule, after the country previously set a goal of ensuring emissions peak by around 2030.

The result would also be part of a continuing trend, which has seen official statistics detail how Chinese carbon emissions have been stable since 2013 and fell for the first time in 2015. The dip in emissions from the world’s biggest polluter has played a key role in ensuring global emissions have remained flat in recent years, even as GDP growth has continued.

Some critics have questioned the veracity of official Chinese emissions figures, and there has been speculation the reduction in emissions has been driven in large part by a slowdown in the country’s economy.

However, the Greenpeace analysis points to a raft of supporting data that indicates how the Chinese government is stepping up investment in clean energy and energy efficiency measures as it seeks to grow its low carbon economy and tackle the country’s on-going smog crisis.

The report notes how statistics released today from the Statistical Communique on Economic and Social Development show that Chinese coal consumption fell in 2016 for the third year in a row, dropping approximately 1.3 per cent.

“China is ploughing money into renewables and reining in its addiction to coal,” said Li Shuo, Greenpeace Global Policy Advisor. “As Trump’s rhetoric leaves the world in doubt over what his plan is to tackle climate change, China is being thrust into a leadership role. These trends give some hope that the global peak in emissions might well be within reach, but only if all major emitters break free from fossil fuels and reduce emissions.”

In related news, Reuters reported today that neighbouring Japan has seen a surge in wind farm development over the past 12 months.

Japan’s Wind Power Association reported that the industry is on track to deliver 300MW of capacity in 2015/16, delivering a near doubling on the level of new capacity installed during the previous year.

The industry group added that a significant pipeline of new projects was also being developed, driven by higher tariffs from the government and an expanding offshore wind sector.

“The projects that started environmental assessments at the end of last year exceeded 10 gigawatts,” the group said in a new study. “If these projects go smoothly, it is possible that achieving the 10 gigawatt capacity is quite possible in the early 2020s.”