Depletion of the ozone layer, ­ the shield that protects life on Earth from harmful levels of ultraviolet radiation, ­is at an unprecedented  level over large parts of the Arctic this spring. This phenomenon is caused by the continuing presence of ozone­-depleting substances in the atmosphere and a very cold winter in the stratosphere (the layer of the atmosphere between around 10 km and round 50 km altitude). 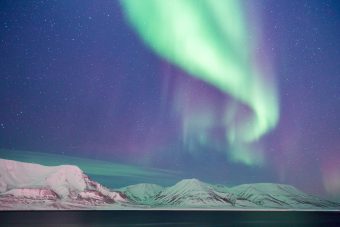 Total ozone columns over large parts of the Arctic have reached record-breaking low values this year with a severe ozone depletion at altitudes of around 18 km. The last time similarly strong  ozone depletion was observed over the Arctic was during spring 2011, and ozone depletion in 2020 seems on course to be even stronger, according to the Copernicus Atmospheric Monitoring Service implemented by ECMWF.

Actions taken under an international agreement called the Montreal Protocol have led to decreases in the atmospheric abundance of controlled ozone-depleting substances. But their concentrations in the upper atmosphere are still high enough to cause severe ozone destruction. The spring depletion is driven by a combination of factors including low temperatures in the Arctic stratosphere during polar night and the arrival of sunlight in the early spring.

However, this winter (2019-2020), the stratospheric polar vortex has been so strong and cold for so long that the temperatures in the Arctic stratosphere have dropped to levels more typical for over Antarctica, creating a large area of polar stratospheric clouds and promoting chemical processes that deplete ozone. Atmospheric conditions blocking wind-driven resupply of ozone from the lower latitudes has also been a factor.

By contrast with the Arctic, the 2019 ozone hole over Antarctica was the smallest on record since the ozone hole was first discovered.

WMO’s Global Atmosphere Watch Network has stations in the Arctic and these are performing high-quality measurements of  both ozone and Ultraviolet (UV) radiation.

Moreover, ozone depletion in the Arctic affects the total ozone budget resulting in an increase of summertime UV levels over Canada and Europe. Each year, based on springtime ozone levels, a summer seasonal UV forecast is provided to the public in different countries.

The most recent Scientific Assessment of Ozone Depletion from WMO and the UN Environment Programme shows that the ozone layer in parts of the stratosphere has recovered at a rate of 1-3% per decade since 2000. At projected rates, Arctic and Northern Hemisphere mid-latitude ozone is expected to heal completely before the middle of the century (~2035) followed by the Southern Hemisphere mid-latitude around mid-century, and Antarctic region by 2060.

Without the Montreal Protocol, this year’s ozone destruction would most likely have been worse. Ozone depleting substances such as chlorofluorocarbons (CFCs) and halons, once present in refrigerators, spray cans and fire extinguishers, have been phased out under the Montreal Protocol. Nevertheless, the atmospheric measurements and analysis allowed to detect the renewed emissions of some of the controlled substances, stressing the importance of continuous observations of these constituents.

The slow recovery of the ozone layer is due to the fact that ozone depleting substances stay in the atmosphere for several decades.