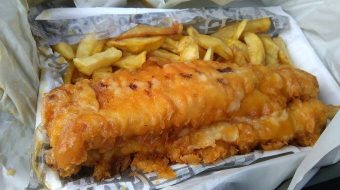 Many of the UK’s most popular dishes could become much more expensive, or even disappear altogether, over the coming decades as a result of climate impacts.

That is the stark warning contained in a report today from NGO WWF ahead of its high profile Earth Hour campaign later this week.

It details how projected climate impacts through to 2050 could undermine availability of key ingredients, necessitate new agricultural techniques, and push up prices across the board.

For example, it draws on warnings that the more extreme rainfall and drought conditions that is expected to result from climate change could drive up the price of onions, tomatoes, and rice, while pressure on land use could see chicken feed switched to alternative sources of calories such as insects and algae. The report says these trends could combine to increase the cost and change the flavour of the UK’s most popular dish, chicken tikka masala.

Similarly, it details how anticipated changes in fish stocks as a result of warming oceans could drastically reduce cod availability, resulting in “anchovies and chips” becoming the national dish.

In addition, cheese production is thought to be at risk of disruption from increased heat stress on dairy herds, while increased incidences of extreme weather is expected to test the viability of Welsh sheep farms in the coming decades.

“The threat to these classic dishes just shows that climate change could impact every aspect of our lives in future if we don’t act now,” said Gareth Redmond-King, head of energy and climate at WWF. “That’s why this Earth Hour we want people to eat more sustainably. That doesn’t necessarily mean going vegan or vegetarian – it means each of us cutting back on the amount of fish, meat and dairy we eat. If each of us takes a small action, together we can combat climate change and future-proof our best-loved dishes.”

Earth Hour will take place from 8:30pm on Saturday 24 March and will once again see some iconic buildings around the world dim their lights.

However, this year’s campaign is particularly focused on food and will see chefs working with the Sustainable Restaurant Association prepare a ‘One Planet Plate’ that boasts specific sustainability credentials.

WWF will also call on people to make one ‘promise for the planet’ to curb their environmental impact.