International pressure may be the only way to stop the Brazilian government from taking a “suicide” path in the Amazon, one of the country’s most respected scientists has said, as the world’s biggest rainforest continues to be ravaged by thousands of deliberate fires. 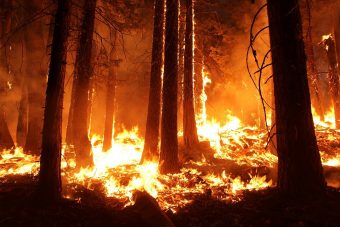 The large number of conflagrations – set illegally to clear and prepare land for crops, cattle and property speculation – has prompted the state of Amazonas to declare an emergency, created giant smoke clouds that have drifted hundreds of miles, and sparked international concerns about the destruction of an essential carbon sink.

“Our house is burning,” tweeted the French president, Emmanuel Macron, who called for emergency talks on the subject at this week’s G7 summit. But the response to the crisis has been mixed: while Norway and Germany have halted donations to the Brazilian government’s Amazon fund, the EU has recently signed a trade deal with South America, and the UK spent this week focusing on post-Brexit business with Brazil.

On Wednesday, the UK trade minister Conor Burns was shaking hands with his counterparts in Brasilia and declaring a desire to “deepen relations”. Asked about the fires, he declined to comment but reportedly said Bolsonaro’s government had “legitimate ambitions to bring prosperity to its people”.

Scientists say the ongoing destruction will have dire consequences for Brazil and the world.

Carlos Nobre, a senior researcher with the Institute of Advanced Studies at the University of São Paulo, said the surge in deforestation was taking the rainforest closer to a tipping point beyond which swaths of the usually humid forest would become a dry savannah, with dire consequences for the climate, wildlife and forest dwellers.

Nobre said deforestation was on course to rise by 20-30% this year and was “very likely” to pass 10,000 sq km for the first time in more than 10 years. The trend has been worsening for several years, but it has accelerated under Bolsonaro, who has weakened the environment agency and expressed support for miners, farmers and loggers.

“The situation is very bad. It will be terrible,” Nobre told the Guardian. “A very large number of these fires are due to the cultural push that ministers are giving. They are pushing deforestation because it is good for the economy. Those who do illegal deforestation are feeling empowered.”

Nobre co-authored a study last year that predicted the southern, eastern and central regions of the Amazon would reach an irreversible stage of degradation once 20%-25% of the forest was cleared. This was not expected for 20-25 years, but Nobre said the tipping point was likely to be brought forward by about five years if this year’s rate of forest destruction continued.