Amazon deforestation accelerated more than 60% in June over the same period last year, in what environmentalists say is a sign that the policies of President Jair Bolsonaro are starting to take effect. 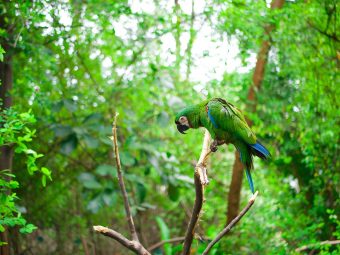 The rate of rainforest destruction had been stable during the first few months of Bolsonaro’s presidency but began to soar in May and June, according to Brazil’s National Institute of Space Research (INPE), a government agency whose satellites also monitor the Amazon.

769.1 square kilometres were lost last month – a stark increase from the 488.4 sq km lost in June 2018, INPE’s data showed. That equates to an area of rainforest larger than one and a half soccer fields being destroyed every minute of every day.

More than two-thirds of the Amazon are located in Brazil and environmental groups blame far-right leader Bolsonaro and his government for the increase, saying he has relaxed controls on deforestation in the country.

“Over the past six months, Bolsonaro and his environment minister have been devoting themselves to the dismantling of the Brazilian environmental governance and neutralizing regulatory bodies”, Carlos Rittl, executive secretary of the environment NGO network Observatorio do Clima (Climate Observatory) told CNN.

Greenpeace called Bolsonaro and his government a “threat to the climate equilibrium” and warned that in the long run, his policies would bear a “heavy cost” for the Brazilian economy. “Bolsonaro already accounts for gigantic setbacks for the environment and for Brazil’s image”, Márcio Astrini, a spokesman for Greenpeace in Brazil said in a statement on Friday.

CNN asked the Brazilian Environment Ministry for comment on the recent numbers but has not received a response.

Delivering on a campaign promise

During Bolsonaro’s election campaign, he promised his government would focus on recovering the Brazilian economy and said he would look at ways of exploring the Amazon’s economic potential. Six months after his inauguration, the populist president is certainly delivering on his promises.

“The strong indication of the increase in the deforestation rate during the government of Jair Bolsonaro shouldn’t surprise anyone,” Rittl said. “It’s, after all, the accomplishing of a campaign promise: Bolsonaro was the first president in all of Brazil’s history to be elected with an openly anti-environmental and anti-indigenous speech”.

Rittl says loggers, farmers and miners emboldened by Bolsonaro’s pro-business stance have jumped on the opportunity, taking advantage of reduced controls and less oversight to seize control of a growing area of land within the Amazon forest.

Meanwhile, the government is hampering the efforts of those who are supposed to keep deforestation in check.

The Brazilian Environment and Renewables Institute (IBAMA), the country’s environmental enforcement agency, has seen its budget cut by $23 million, and six months in, the government has only nominated the heads of four of IBAMA’s 27 state offices. None of those four are located in states with jurisdiction over the Amazon rainforest.

In addition, official data obtained by Observatorio do Clima and sent to CNN shows the number of operations IBAMA has conducted in 2019 has gone down since the beginning of the year, around the same time Bolsonaro was sworn in.

“The explosion of the number of [deforestation] alerts in the past couple of months should lead to an intensification of inspection operations, but that hasn’t happened,” Rittl said.

He also put some of the blame on some European countries. “As much as European leaders have made ‘beautiful’ speeches showing concern about Bolsonaro’s environmental policies, and even though the [Paris Climate] agreement has environmental safeguards, the EU is signaling that it is at least tolerant with the ongoing anti-environmental agenda”.

French President Emmanuel Macron and German Chancellor Angela Merkel have both said they were concerned about the erosion of environmental protections in Brazil, but neither France, Germany or the European Union have gone beyond words. Last Friday, the European Union struck a deal with the South American trade bloc Mercosur, which includes Brazil, a move environmentalists say will only put additional pressure on the Amazon and its fragile ecosystem.

The Amazon forest is often referred to as the planet’s lungs, producing 20 per cent of the oxygen in the earth’s atmosphere. It is considered vital in the ongoing efforts to slow down global warming and it is also home to uncountable species of fauna and flora. With roughly half the size of the United States of America, it is the largest rainforest on the planet.

Its area has been steadily shrinking over the past century with deforestation reaching its peak in 1995, when 29.059 km² were lost. The rate of destruction had then been decreasing, reaching its lowest point in 2012.

It has been accelerating ever since.