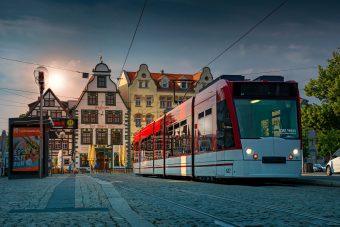 Alstom and Carbone 4, a leading consulting company specialized in climate-resilient and low-carbon strategy presented recently the results of a study demonstrating that tramways have a smaller footprint than Bus Rapid Transit (BRT) systems.

With global urban transport emissions expected to double to nearly 1 billion tonnes of CO2 equivalent per year by 2025, favouring transport modes with the lowest carbon footprints is crucial. Rail can be a key contributor in the fight to reduce greenhouse gases (GHGs) and reach the target set at COP21 in 2015 to keep global warming below 2°C.

The tram, for example, has been identified as one of the greenest urban transport modes due to its low environmental impact when in operation. The study conducted by Alstom and Carbone 4 compares the carbon footprint of tramways and BRT systems, enabling a better understanding of their comparative performance over the entire lifecycle including construction, operation and maintenance of the two systems. An analysis conducted on a typical 10 km line operated in Belgium demonstrated that for equivalent transport capacity, over a 30-year lifetime, a tramway system emits about half as much CO2 as a BRT system operated with diesel buses, and about 30% less CO2 than a BRT system operated with hybrid buses.

Cécile Texier, Sustainable Development Director at Alstom, said: “At Alstom, we are constantly working to promote sustainable mobility, striving to reduce the operational cost from energy for the benefit of our customers and committed to reducing the carbon footprint of transport. The survey conducted with Carbone 4 illustrates that rail systems have a lower carbon footprint that other motorised modes. It also shows that optimised system like Attractis, an innovative integrated tramway system that is simpler to operate and cost-effective, can significantly reduce CO2 emissions from the construction phase.”