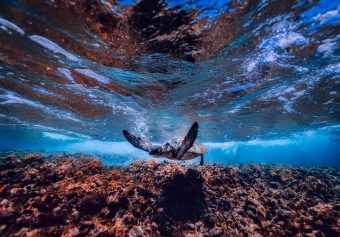 The remaining wilderness areas, mostly in the remote Pacific and at the poles, need urgent protection from fishing and pollution, scientists say.

Just 13% of the world’s oceans remain untouched by the damaging impacts of humanity, the first systematic analysis has revealed. Outside the remotest areas of the Pacific and the poles, virtually no ocean is left harbouring naturally high levels of marine wildlife.
Huge fishing fleets, global shipping and pollution running off the land are combining with climate change to degrade the oceans, the researchers found. Furthermore, just 5% of the remaining ocean wilderness is within existing marine protection areas.

“We were astonished by just how little marine wilderness remains,” says Kendall Jones, at the University of Queensland, Australia, and the Wildlife Conservation Society, who led the new research. “The ocean is immense, covering over 70% of our planet, but we’ve managed to significantly impact almost all of this vast ecosystem.”
Jones said the last remnants of wilderness show how vibrant ocean life was before human activity came to dominate the planet. “They act as time machines,” he said. “They are home to unparalleled levels of marine biodiversity and some of the last places on Earth you find large populations of apex predators like sharks.”
Much of the wilderness is in the high seas, beyond the protected areas that nations can create. The scientists said a high seas conservation treaty is urgently needed, with negotiations beginning in September under the UN Law of the Sea convention. They also said the $4bn a year in government subsidies spent on high seas fishing must be cut. “Most fishing on the high seas would actually be unprofitable if it weren’t for big subsidies,” Jones said.
The new work joins recent studies in highlighting the threat to oceans. Scientists warned in January that the oceans are suffocating, with huge dead zones quadrupling since 1950, and in February, new maps revealed half of world’s oceans are now industrially fished. “Oceans are under threat now as never before in human history,” said Sir David Attenborough at the conclusion of the BBC series Blue Planet 2 in December.

The new research, published in the journal Current Biology, classified areas of ocean as wilderness if they were in the lowest 10% of human impacts, either from one source, such as bottom trawling, or a combination of them all.
As most are on the high seas, very few are protected. “This means the vast majority of marine wilderness could be lost at any time, as improvements in technology allow us to fish deeper and ship farther than ever before,” Jones said.

Climate change is causing growing damage and Jones said Arctic wilderness areas protected by ice cover in the 1970s had now been lost after the ice melted and fishing boats were able to access them. It is increasingly a global problem, he said: “In future, as climate change gets worse, I think you can definitely say pretty much everywhere in the ocean is going to come under increasing level of threat.”

There are some bright spots, such as the remote corals in the British Indian Ocean Territory around Diego Garcia, from which islanders were controversially removed in the 1960s. In the Antarctic, major fishing companies now back the creation of the world’s biggest marine sanctuary.

The new study aimed to include the maximum area of likely wilderness, said Ward Appeltans, at the Intergovernmental Oceanographic Commission run by Unesco: “So the claim that only 13% of ocean wilderness remains is all the more striking.” He said the research focused on the ocean floor, and did not include impacts on the water column above it, and backed calls for a global ocean conservation treaty.
Jones said: “Beyond just valuing nature for nature’s sake, having these large intact seascapes that function in a way that they always have done is really important for the Earth. They maintain the ecological processes that are how the climate and Earth system function – [without them] you can start seeing big knock-on effects with drastic and unforeseen consequences.”