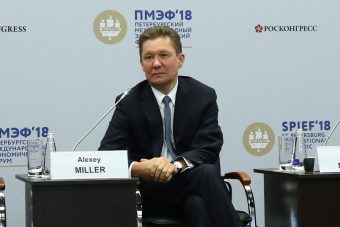 He stress es that Gazprom is making consistent efforts to expand our resource base. Since Gazprom is a partially state-owned company, the Russian Government can pursue an efficient policy to manage the national mineral and raw material base. Each year for many years, we have increased our gas reserves, with the reserve replacement ratio of more than 1. In 2016, the ratio is 1.09.

They set new records in terms of gas deliveries to Europe. On November 29, 2016, Gazprom’s gas supplies to that market totaled 614.5 million cubic meters per day. That amount is unprecedented for the Soviet Union and modern Russia alike. Add to that the fact that our total gas exports set an absolute record as well. The aggregate amount of gas exported to Europe in 2016 – and I can say that for certain – is expected to exceed 179 billion cubic meters. That is a historic high.

The Nord Stream 2 project is running strictly on schedule. The gas pipeline will be brought online in late 2019. Me Miller is absolutely convinced that they will put onstream new gas export capacities in a timely manner and in full. The amount of gas to be supplied across the Baltic Sea via Nord Stream and Nord Stream 2 will total 110 billion cubic meters per year.

According to the data obtained this days, the Nord Stream capacities are loaded by even more than 100 per cent. We supply upward of 150 million cubic meters of gas daily via that gas pipeline. The growing consumption in our key partner countries is yet another proof of the fact that the Nord Stream 2 project is extremely important to the European market.