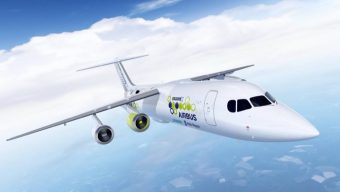 Automakers are scrambling to add hybrid powertrains to more cars in an effort to meet stricter global emissions standards. But cars aren’t the only vehicles burning a lot of fossil fuels.

Airbus, Rolls-Royce (the aircraft engine manufacturer, not the car company), and Siemens are teaming up to develop a hybrid aircraft. Called the E-Fan X, it won’t go into production, but the partners hope it will demonstrate the feasibility of electrified commercial aircraft. The E-Fan X is expected to make its first flight in 2020, following thorough ground testing.

The testing program will start out with a modified BAe146 jet. Initially, one of the plane’s four gas-turbine engines will be replaced with an electric motor. If all goes well, a second electric motor will replace another one of the conventional engines. As development work continues, the partners will also try to establish new standards for certifying hybrid and electric aircraft, according to an Airbus press release.

Airbus, which has toyed with all-electric aircraft before, will supply the control system and batteries, and integrate the hybrid system’s components with existing flight controls. Siemens will provide the two-megawatt electric motors and related electronics. Rolls-Royce will provide a generator and jet-engine components for the electric motors to integrate with. The E-Fan X will still be a jet aircraft, just one that uses electric motors rather than burning fossil fuels to generate thrust.

A truly comprehensive strategy to reduce transportation-related emissions has to involve vehicles besides cars, and the E-Fan X could be an important step toward improving the efficiency of commercial aircraft. Airlines will probably appreciate the reduction in fuel costs, too. But introducing a new technology into the heavily-regulated airline industry will probably take time.