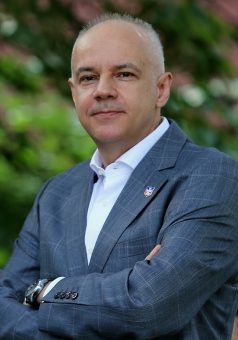 If all the citizens of Belgrade, as their Mayor, walked every day, used public transport more, and planted some trees when the opportunity arises, perhaps our capital would already be a bit cleaner and the air healthier. Of course, to give up the comfort of private cars, it is necessary to have more buses on the streets, to have the subway built as soon as possible and to have such traffic infrastructure that we can safely and massively use bicycles as a means of transport. Naturally, we do not want to be worried about how polluted the air we breathe during the heating season is, that we want to drink quality water always, have our rivers clean and our city packed with parks and greenery. We spoke to the Mayor, Prof Zoran Radojicic PhD, about how far we are from such an image of Belgrade and what the City does to become a green capital. The Mayor has recently launched the challenge Tree for Belgrade with the idea of planting as many trees as possible in the capital so that by 2025 we can meet the goal of having 25 per cent of the urban part of the capital green.

EP: Belgrade has recently ranked as one of the cities with the most polluted air in the world, and an increase in concentration of toxic particles is yet expected in the heating season. There is an application on the City’s website where Belgrade citizens can monitor the air quality and receive recommendations in the event of pollution, but what has the City done so far regarding short-term and long-term measures to fundamentally tackle this problem?

Zoran Radojicic: The City of Belgrade has been implementing an Air Quality Plan that includes measures and actions to reduce the largest sources of pollution. Since 2016, when this Plan came into force, the City has invested more than 300 million dinars, and within this plan, the most significant measures taken were the reduction of the number of individual combustion chambers, the improvement of the performance in thermal power plants and the expansion of the district heating network. We are implementing a program for shutting down boiler rooms in public buildings by connecting them to the district heating system and the natural gas distribution system. The district heating system in Belgrade includes 65 per cent of primary and almost 85 per cent of secondary schools, as well as about 75 per cent of kindergartens. Since 2012, 17 boiler rooms have been shut down in primary and pre-school institutions, and those facilities have been connected to the district heating system. The plan is to continue shutting down boiler rooms in public buildings. For the time being, our priorities are schools, and later health care institutions and other public facilities. As a part of this Plan, to improve air quality, we have expanded pedestrian zones and raised public awareness of the importance of being informed about air quality through the application you mentioned – BEOEKO.

By purchasing 244 new buses by the end of the year, GSP will have 85 per cent of the fleet with Euro 5 and Euro 6 standard engines. Likewise, in the next year, funds are allocated for the purchase of another 100 articulated buses, 40 trolleybuses and 10 electric buses. With these moves, the structure of the bus subsystem will be significantly improved in terms of the exhaust emission itself, which will have a positive effect on air quality. The Forestry Strategy of the City of Belgrade should not be forgotten either, which is a direct implementation of measures aimed at reducing air pollution, but also adapting to climate change and protecting soil from erosion. All of these measures will improve air quality in Belgrade, but we all know that this is a key project to tackle the issue of exhaust emissions originating from traffic and traffic jams.

EP: What measures can be taken to reduce the number of private vehicles in the wider center and to enable Belgrade citizens to use public transport more?

Zoran Radojicic: Next year we will start building the metro, which will be a revolutionary change in the way urban transport operates. According to our estimates, more people, between 25 and 30 per cent, will replace cars with the subway, which will reduce the number of cars downtown and allow people to travel more efficiently. I believe that by
modernizing the fleet, which I mentioned, we will be able to get citizens to use as much urban transport as possible, especially for shorter distances. Changes towards a greener capital cannot happen overnight, and the city’s urban plans and strategies have defined more walking and cycle paths in recent years, especially in the city center area, which you can see when walking downtown.

EP: How to motivate the citizens of Belgrade to use a bike as a means of transport more? Bicycle tracks whose number in the city has increased are not stimulating enough.

Zoran Radojicic: As of February 2020, the Sustainable Urban Mobility Plan enters into force, and such a plan boasts all modern metropolises. The idea is that every road has a bike lane to create a real network. It is necessary for cyclists to be safe on the streets, and to make this possible, it is necessary to develop a functional cycle network. From 2017 to 2019, another 35 km of cycle paths were completed, which means that there are currently 100 km of paths in Belgrade. However, these tracks are mostly along rivers and are used for recreational purposes, which is highly complementary, but the culture of using a bicycle as a means of transport has not yet taken root. It is with the new Sustainable Urban Mobility Plan that we want to change that, and I am sure that the citizens of Belgrade will follow our idea and goal. Over the next four years, another 120 km of cycle tracks are planned, and the public bicycle system will encourage us to think more about the bike as a means of transportation.

EP: On the streets of Belgrade, there is an increasing number of electric scooters, which are banned in some metropolitan areas because they are too risky for safety, although they are a convenient environmental mode of transport. How does the City of Belgrade intend to regulate this type of transportation?

Zoran Radojicic: Electric scooters could be a part of the solution to the traffic problem in Belgrade, but only after the change in existing traffic regulations. Due to their enormous popularity, they are changing the traffic image of major European cities, including Belgrade. It is for this reason that there is a need to regulate them, especially in the field of security. It applies equally to pedestrians as well as to the users of electric scooters. I would point out that this is an ecological mode of transport, in line with our commitment to turning to the green hierarchy of transport which gives priority to pedestrians, cyclists and urban public transport, so that cars are used less.

EP: Many experts point out that a serious unifying strategy is required to implement adequate environmental measures and solutions in the capital earnestly. You stated last year that the City of Belgrade is working on developing a strategic plan that will deal with climate, energy and Belgrade as a green city. How far has this strategy gone?

Zoran Radojicic: I signed an agreement to join the Covenant of Mayors for climate and energy in 2018 and pledged to reduce the CO2 emissions by up to 40 per cent by 2030. Consequently, the City of Belgrade committed to developing the Green City Action Plan (GCAP) and the Sustainable Energy Development and Climate Change Action Plan (SECAP) within the European Bank for Reconstruction and Development’s Green City program. We are currently in the process of drafting these documents, we have put together a working group that together with eminent consultants in this area work on the development of an action plan, so I expect that by the end of 2020 we will adopt such a document. It will also focus on ways, concrete measures and solutions on how to adapt to climate change through reducing carbon dioxide emissions, increasing energy efficiency, using renewable energy sources and creating sustainable mobility in the city.

EP: How green is Belgrade now? Will we, by 2025, fulfill the plan, which the City has committed to, to have 25 per cent of green space in the urban part of the capital? As the Mayor, recently you launched the challenge Tree for Belgrade and invited organizations and companies to join it. 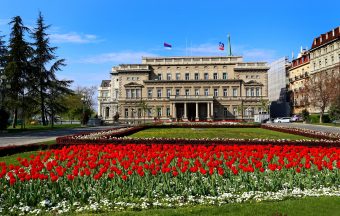 Zoran Radojicic: Currently 15 per cent of the territory of the City of Belgrade is covered with green space. For this ambitious but achievable goal, we need another 2.5 million seedlings by 2025. As a Mayor, since the beginning of my term, I have been in favour of a healthier and greener Belgrade. I started the challenge called Tree for Belgrade to join as many international organisations as possible, as well as socially responsible companies, in the fight for a healthier and greener Belgrade and planting as many trees as possible in our capital. Will and readiness to participate in this challenge were first shown by the German international organisation GIZ, planting 163 trees in Usce Park. I want to thank GIZ and Director Gerhard Zipel for supporting us to begin the Tree for Belgrade challenge, as well as for making it possible to achieve other sustainable development goals as soon as possible for the benefit of all our fellow citizens.

I also invite other international organisations, socially responsible companies to join this challenge and to plant as many trees as possible in Belgrade. The contact email is drvozabeograd@beograd.gov.rs. By planting in Belgrade, we have a positive effect on air quality, climate change, we lower temperatures during the summer, and reduce carbon dioxide emissions, the risk of flooding and landslides, noise levels and the effects of global warming. Trees and nature represent the green infrastructure of every city, which is why it is essential to preserve and restore it. PUC “Zelenilo Beograd” plants around 4,000 trees a year and 70,000 tree seedlings regularly. Planting is an integral part of the renovation and reconstruction of every park in Belgrade. We also maintain and restore natural resources such as Kosmaj, Avala, War Island and others. Belgrade is also launching the Generation Tree campaign – in 197 elementary schools, and each first grader will plant one tree in their schoolyard.

Read the whole interview in the new issue of the Energy portal Magazine  GRINNOVATIONS, December 2019 – February 2020.