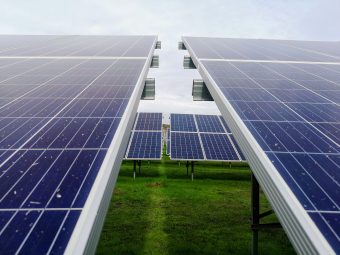 Agrophotovoltaics is a fancy word that means it is possible to combine solar power with farming in a way that benefits both. In theory, it would be possible to meet all the world’s electrical needs with solar panels but they can’t be mounted on the permafrost in Siberia, which is rapidly melting, or high atop the world’s mountains. Nor can they float out in the middle of the ocean. For maximum efficiency, they should be located as near as possible to the places where the electricity they generate will be used or near existing transmission lines. They also should be sited away from forests and structures that will cast shadows on them during the day.

Because of all those considerations, solar power plants and farms often compete for the same land. But researchers around the world, led by Fraunhofer ISE in Germany, are finding new ways to combine the two. According to a press release from Germany’s Next2Sun, it is about to switch on an innovative new 4.1 MW agrophotovoltaic installation in Baden-Württemberg that uses 11,000 n-type PERT bifacial solar panels, each with a power output of 380 W. The panels are mounted on 5,800 vertical racks that cover about 14 hectares of land. Annual output for the facility is expected to be 4,850 MWh and the electricity produced will have a wholesale value of 6 cents per kilowatt hour.

Next2Sun says in its press statement, it was “founded in order to implement a completely new type of photovoltaic system concept. The result is an innovative agrophotovoltaic system that combines agricultural use and solar power production economically on the same area. The basic principle of the concept consists in the vertical arrangement of solar modules that can use sunlight from both the front and the rear. The two active sides face east and west. The areas between the rows of modules can continue to be used for agriculture and the resulting flower strips provide space for the endangered insect world and many species of birds.”

The panels were manufactured by China’s Jolywood but Next2Sun managing director Sascha Krause-Tünker tells PV Magazine, “Due to the performance advantages and, in particular, the higher rear side efficiency, we expect the use of heterojunction modules in future projects, such as those offered by Meyer Burger.” That company is currently building a heterojunction cell production facility in Bitterfeld and a module production facility in the former Solarworld plant in Freiberg. The first modules are expected to roll off the production line in the middle of next year. Next2Sun also has other agrophotovoltaic projects coming up. 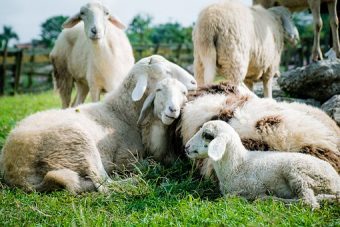 Solar power developer MaxSolar, in partnership with Wien Energie in Austria, is also about to start operations for its new 11.5 MW solar power plant — one of the largest in Austria — near Vienna. Located atop a former gravel operation, it will feature 25,78o solar panels, some of which will be mounted vertically on an east-west axis. Some 150 Jura sheep will allowed to roam the facility, acting as four legged lawn mowers during the warm weather. The project may also incorporate the cultivation of crops at some point in the future as well.

MaxSolar tells PV Magazine, “In order to offer the sheep an optimal pasture area, special precautions are taken,” said Maxsolar. “Pasture seeds are sown, the photovoltaic modules are mounted slightly higher and all electrical components are well protected.” The company claims combining solar and farming will make the land 60 percent more productive, a finding in line with research by Fraunhofer ISE.

“One of the central questions of the energy transition is how the expansion of ground-mounted PV systems will have the most positive effect on environmental protection, agriculture and nature conservation,” says MaxSolar spokesperson Thomas Hager. Michael Strebl, managing director of Wien Energie adds that his company “has been massively promoting the expansion of solar power for years. Our focus is on the roofs of the city but that alone will not achieve the climate targets. Here…..we are showing that ground mounted systems also fit perfectly into the climate protection concept if they are designed carefully.”

The takeaway is that solar and farming do not have to compete for the same land. They can work together to make the land more productive, which will help raise incomes for struggling farmers while supporting the transition to renewable energy.