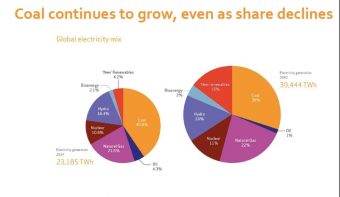 Coal is not clean. But that does not mean that it could not be made cleaner. And that’s relevant because much of the developing world will remain dependent on coal, as will most developed nations to a lesser degree. At issue then is whether carbon capture and storage is technically possible and if so, at what cost.

“Twenty-two countries have submitted climate plans that include a role for advanced coal technologies,” says Benjamin Sporton, chief executive of the World Coal Association, in a telephone interview. “We are in Marrakech to talk about about the role of that technology. It is misguided for people to talk about how to get rid of coal. We need to be part of the solution.”

The association says that coal is now about 40% percent of the global electricity mix and that in 2040, it will still be 30%. The central question is thus how to make it cleaner as opposed to how to make it go away.

The Asian share of the global coal pie is now about 69% but that will grow to be 77% in 2040. Even China, which will reduce its coal usage from 75% of its electricity portfolio to 49% during this time, will still use 27% more coal because of its anticipated economic expansion. The United States, too, will depend on coal for 25% of electricity in 2040, says the International Energy Agency in Paris.

Sporton acknowledges that carbon capture and storage has been an elusive technology but says in the same breath that it remains within reach. To get there, national governments need to place the same emphasis on its development as they have on the expansion of renewables. Green energies, for example, have received $800 billion in federal subsidies while carbon capture and storage has gotten just $20 billion, all over a 10-year time period.

“The objective here is to reduce emissions,” Sporton says. “Governments are recognizing that carbon capture and storage has a role to play. This is not something that a lot of environmentalists want to hear. But coal is here for decades to come and they can’t wish it away.”

American Electric Power is now retiring 6,500 megawatts of coal-fired capacity, saying that it will be using natural gas that is just as cheap and that releases fewer carbon emissions. First Energy Corp., meanwhile, has closed several coal plants, which had provided 13 percent of its power and Duke Energy is doing the same: In 2008, the utility generated 70% of its electricity from coal. Now that figure is 42%, and falling.

“With the exception of Asia and potentially Latin America, we see coal as continuing on its descending glide path partially due to the Paris accords but more so due to the increasing cost, complexity and financial risk of building such facilities,” says Mark Repsher, an energy expert at PA Consulting Group. “Also, the potential proliferation of the lower cost of natural gas supply across the globe” will have the same effect.

But coal use will still exists in the United States, as it will elsewhere around the globe. China’s National Energy Association expects a 20% pop over five years there. Even Germany, bent on expanding renewables, says it will still have a role, as does Japan, which ask why it can’t be used more “efficiently.” What then is the alternative to current coal technologies?

Coal gasification plants scrub the mercury, nitrogen oxide and sulfur dioxide before they would separate the remaining byproducts: carbon dioxide, carbon monoxide and hydrogen, which could be used to power everything from cars to power plants. The power sector’s biggest such project went live at Boundary Dam in Estevan, Saskatchewan, Canada on October 2, 2014.

And, Mitsubishi Heavy Industries and Southern Company said that they had completed an initial demonstration phase of carbon capture at Southern’s coal-fired Plant Barry in Alabama, which was able to recover more than 90 percent of the carbon dioxide, send it through a 10-mile pipeline, and inject it underground. But Southern’s oil enhancement Kemper project in Mississippi is $4 billion over budget and two years overdue.