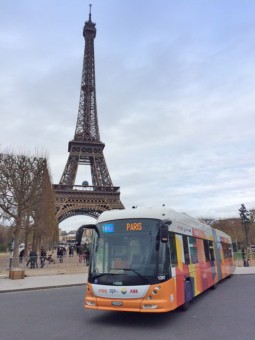 ABB’s innovative electric bus charging technology was one of the highlights of the show of sustainable transport systems around the Eiffel Tower in Paris, where world leaders are meeting to seek a global agreement to tackle climate change.
Organized by RATP, the French capital’s public transport authority, the show presented solutions for the future of urban transport. The ABB system, known as TOSA (a French acronym for Transport with Optimized Power Supply System) was the only all-electric solution for an articulated bus among the vehicles on display.

ABB TOSA technology was launched in 2013 in Geneva, where it is used on a line connecting the airport with the city’s main venue for trade fairs. Designed for urban transport of high-capacity, the articulated bus can be charged in just 15 seconds while passengers alight and board at selected stops along the route, with longer top-ups at each terminus. “The tremendous interest in TOSA in Paris reflects the attractive business prospects for this solution,” said Olivier Augé, Global Product Manager for TOSA. “Public transport authorities in cities around the world are planning to switch to less polluting technologies, and many are now looking at our zero-local-emission systems as potential solutions.” In Paris, RATP aims to have 80 percent of its buses running on electricity by 2025.

A controlled moving arm on the roof of the TOSA e-bus automatically connects with a charger at selected bus stops in less than a second. This feature and the 15-second charging time minimizes time needed at the bus stop. The TOSA e-bus stores its energy in compact batteries mounted on the roof of the bus, increasing passenger space on board. The e-bus is also able to recover energy while braking to further reduce the total energy consumed by the vehicle. At 18.75 meters long, the bus has a capacity of 143 passengers.

A further advantage of the TOSA system is that, unlike trams and trolleybuses, very little infrastructure is required along the route, reducing both the visual pollution caused by catenary systems, and the required maintenance.

ABB is a global leader in fast-charging solutions for electric vehicles. Alongside the TOSA e-bus system, it produces fast DC chargers for electric buses and its e-bus product portfolio includes drivetrain solutions (the components that deliver power from a vehicle’s engine to its driving wheels) and prefabricated e-bus substations.

Source and photo by www.abb.com