Norwegian Coast Guard’s vessel KV Svalbard has become the first ever Azipod®-powered ship to reach the North Pole, in another milestone for ABB’s leadership in sustainable marine propulsion technology. 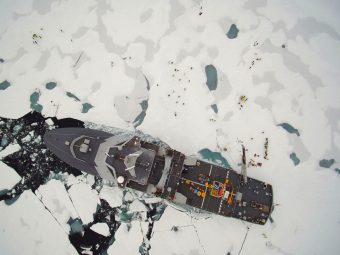 With its advanced technology, superior performance in the toughest marine environments and environmentally friendly electric operation, ABB’s Azipod® propulsion system has become an industry standard. In its latest milestone, Azipod® has made history, driving the Norwegian Coast Guard icebreaker KV Svalbard all the way to the North Pole.

KV Svalbard, built in 2001 and equipped with twin 5MW Azipod® icebreaking units, became the first Norwegian vessel to sail to the North Pole this August. The ship travelled through packed polar ice at speeds as high as 6 to 7 knots as part of an international scientific expedition, called Coordinated Arctic Acoustic Thermometry Experiment (CAATEX), that’s led by the Norwegian non-profit research foundation The Nansen Center.

“We were able to navigate through the Arctic waters and reach the North Pole faster than we thought possible,” said Ottar Haugen, Commander of the Norwegian Coast Guard. “This is a significant milestone for us and a proof that we have a vessel in our fleet equipped with a robust propulsion system that enables operations in the harshest ice conditions – all the way to the North Pole.” 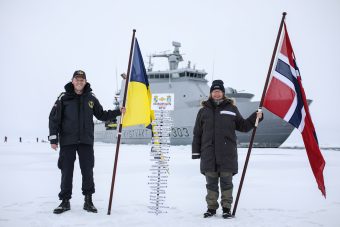 Azipod® is an electric propulsion system that enables ships to be highly maneuverable, utilizing an electric drive motor located beneath the hull in a submerged pod, which can rotate 360 degrees to deliver thrust in any direction. An Azipod® propulsion is capable of breaking up to 2.1 m thick Arctic ice and has a proven ability to cut fuel consumption by up to 20 percent as compared to traditional shaftline marine propulsion systems.

When Sovcomflot’s LNG (liquefied natural gas) carrier Christophe de Margerie made the world’s first-ever crossing of the Northern Sea in 2017 without the aid of an ice-breaker, it was powered by ABB’s Azipod® propulsion. Notable for many attributes, this vessel and her 14 sister ships feature some of the most powerful Azipod® thruster units for ice-going conditions produced by ABB (3x15MW).

The success of the Arctic expedition is the latest in a long line of milestones point for Azipod®. Since its introduction in 1990, ABB has delivered Azipod® electric propulsion systems to over 90 icebreakers and ice-going vessels with a combined propulsion power of up to 45 MW. Options for Azipod® propulsion span 1MW to 22MW, and the technology has played a key role in developing ABB’s strong position for environmentally-friendly electric propulsion. Azipod® propulsion systems have accumulated more than 15 million running hours, saving over 700,000 tons of fuel in the passenger cruise segment alone. 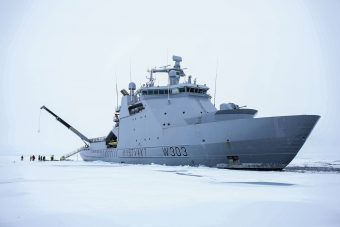 ABB has continually improved Azipod® over the past three decades, resulting in higher efficiency and reduced emissions. This means that a ship consumes less fuel driving the generators which provide electric power to the Azipod®. Lower fuel consumption means reduced CO2 emissions. That’s important because the global ferry industry, which transports 2.1 billion passengers annually, is under pressure to meet the International Maritime Organization’s target of reducing annual emissions by 30 percent by 2025.