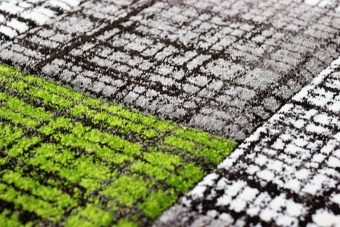 Around the world thousands of businesses are grappling with the problem of cutting the carbon emissions embedded in their products. But carpet maker Interface is taking the challenge one step further, developing the world’s first ‘carbon negative’ carpet.

The prototype tile, revealed earlier this week, has a carbon footprint of minus 2kg – simply put, there is less carbon dioxide in the atmosphere after its manufacture than before.

This feat was achieved by using plant-derived carbon – the carbon emitted from plants when they decompose – and converting it into a durable material that stores that carbon for at least 10 years, Interface says. That material is then used to make the carpet tile, which has been dubbed ‘Proof Positive’.

At the end of the carpet’s life the tiles can be recycled to create new ones, so the stored carbon is not released into the atmosphere at a later date. Interface claims that if the prototype type is scaled up to mass production, it could become a “critical solution” for reversing global warming over the long-term.

The development of the tile forms part of Interface’s Climate Take Back mission, which launched a year ago and set a series of innovation goals to inspire both Interface and other businesses to reduce their environmental footprint and even help to reverse climate change.

“We created this Proof Positive tile to inspire our customers, our industry, and the world to think more broadly about taking on the climate challenge in a new way – to find innovative solutions that will not only reduce, but ultimately reverse global warming,” Chad Scales, Interface’s chief innovation, marketing and design officer said in a statement. “At Interface, we can see a not-so-distant future in which architects, designers, and businesses collaborate to create spaces with climate change in mind, by choosing materials that will reverse global warming.”