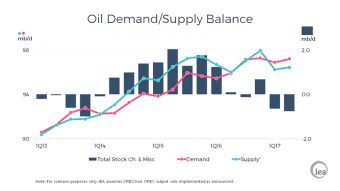 The output cuts announced by OPEC and eleven non-OPEC producers have entered their probation period and it is far too soon to see what level of compliance has been achieved. The coming weeks will provide more clarity and in the meantime developments elsewhere in the oil supply/demand balance are very intriguing. Once again we have revised upwards our estimate for global oil demand growth in 2016: we now see growth at 1.5 mb/d, with most of the revision contributed by stronger European demand, mainly in LPG and diesel. Europe has seen two years of year-on-year growth following nine straight years of flat or declining demand.

In 2017, however, we still expect the rate of growth for global demand to fall back to 1.3 mb/d, albeit this is slightly above the average rate seen in this century of 1.2 mb/d. The prospect of higher product prices – assuming that the cost of crude oil rises in 2017 – plus the possibility of a stronger US dollar are factors behind our reduced demand growth outlook for this year.

In non-OPEC countries, the stabilisation since mid-December of Brent crude oil prices around the $55/bbl level, and the assumption that lower output from the parties to the output agreement will probably see prices rise, is offering encouragement to higher cost producers. Attention is inevitably focused on the US shale oil patch where data shows the rig count increasing for six straight months to November after reaching its nadir in May 2016; provisional data for December shows the highest number of new rigs added since the heady days of April 2014.

Not only is the rig count rising, but recent reports tell us that the productivity of shale activity has improved in leaps and bounds. Whether it be shorter drilling times or larger amounts of oil produced per well, there is no doubt that US shale industry has emerged from the $30/bbl oil world we lived in a year ago much leaner and fitter. The IEA has anticipated for some time that LTO production will increase in 2017, but we are now expecting an even larger increase of 170 kb/d, following a decline of nearly 300 kb/d last year.

Non-OPEC production is not all about the US, however. Elsewhere, long-planned projects are coming on stream in Brazil and Canada and their combined production will rise by 415 kb/d this year. In China and Colombia, the sharp declines in production seen in 2016 will be reduced. For the non-OPEC countries as a whole, net production growth will be 380 kb/d – after taking into account the output reduction commitments by eleven countries – and this increase could be supplemented by higher production from Libya and Nigeria, both of which are exempt from the production cuts.

We were reminded on Jan. 16th by Saudi Arabia’s oil minister that the output deal might not be extended beyond its six month expiry date. By saying that an extension was “unlikely” he has issued a powerful reminder that if stocks are drawn in the first half of 2017 by the approximately 0.7 mb/d implied by OPEC producing close to its target with support from other producers, the market will have tightened and prices stabilised but not at a sufficiently high level to allow another bonanza for high cost producers. In the meantime, the market awaits the outcome of the output deal.