The idyllic stream that meanders through the Flemish countryside has been called the most polluted stream in Europe. 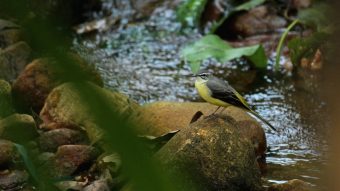 When you think of a polluted waterway, what do you envision? For me, a dark, oil-slicked river studded with garbage comes to mind, or maybe a malodorous and oddly colored creek in an industrial area. What I do not picture is a little stream in the Flemish countryside.

But it is indeed just that, a little stream in the Flemish countryside, that has won the crown as the most polluted small waterway in Europe, according to research from the University of Exeter.

For the study, a group of scientists from the Greenpeace Research Laboratories at the University of Exeter tested 29 small waterways from 10 European countries. What they found is remarkable. Amongst the samples, they discovered more than 100 pesticides – including 24 that are banned in the EU – as well as 21 veterinary drugs.

Not one stream or canal was clean; each contained at least multiple pesticides, and most contained veterinary antibiotics. In 13 of the 29 waterways, concentrations of at least one pesticide exceeded European standards for acceptable levels, says the University.

“There is huge uncertainty about what effects these mixtures of chemicals could have on wildlife and human health,” said Dr Jorge Casado, who led the analytical work.

But it was the pretty little tributary on the outskirts of Ledegem, a village in the Flanders region of Belgium, that was the doozy. The Wulfdambeek sample included 70 hazardous pesticides, including 38 weed killers, 10 insecticides, and 21 fungal killers, reports The Guardian.

The stream was so polluted and in such high concentrations that the water itself would probably work as a pesticide, said Casado.

“The most important thing to highlight is that there is a lack of ways to assess how this mix of hazardous materials are affecting the ecosystem,” he added.

Pesticides find their way into the water by a variety of routes, from spray drift and leaching to runoff of rainwater. Importantly, however, the research was not designed to call out farmers. Rather, say the researchers, the idea is to bring people and groups from different fields to secure a “flourishing future for humanity.”

“This is not a case of us versus farmers or water companies,” said Dr Paul Johnston, who co-authored the paper.

“This is about using forensic scientific methods to investigate a problem that faces us all. We have to work together to find a holistic solution.”

“Farmers don’t want to pollute rivers, and water companies don’t want to have to remove all that pollution again downstream,” he added, “so we have to work to reduce reliance on pesticides and veterinary drugs through more sustainable agriculture.”

The paper was published in the journal Science of the Total Environment.