A recent study shows that symptoms of depression can be reduced for people who have access to green spaces. Researchers in Philadelphia transformed vacant lots in the city into green spaces and found that adults living near these newly planted areas reported decreased feelings of depression, with the biggest impact occurring in low-income neighborhoods. 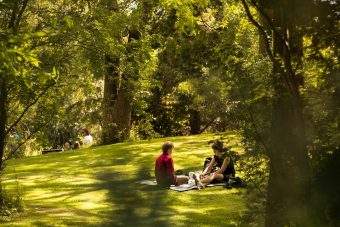 Researchers at University of Pennsylvania’s Perelman School of Medicine teamed up with members of the Pennsylvania Horticultural Society to transform and observe 541 randomly selected vacant lots in Philadelphia. Eugenia South, assistant professor and co-author of the study, said Philadelphia’s littered lots were an ideal environment to set-up their groundwork. “There’s probably 40,000 of them in the city” she told NPR, “but they’re concentrated in certain sections of the city, and those areas tend to be in poorer neighborhoods.” According to the study, lower socioeconomic conditions have already been proven to distress mental health states.

The researchers separated the lots into three groups: a control group of lots where nothing was altered, a set of lots that was cleaned up of litter, and a group of lots where everything, including existing vegetation, was removed and replanted with new trees and grass.

“We found a significant reduction in the amount of people who were feeling depressed” South said. Her team used a psychological distress scale to ask people how they felt, including senses of hopelessness, restlessness and worthlessness, as well as measuring heart rates, a leading indicator of stress, of residents walking past the lots. Low-income neighborhoods showed as high as a 27.5 percent reduction in depression rates. South said, “In the areas that had been greened, I found that people had reduced heart rates when they walked past those spaces.”

While previous research has cross-studied the beneficial effects of green spaces on mental health, experts, such as Professor Rachel Morello-Frosch from the University of California, Berkeley, are regarding this experiment as “innovative.” Morello-Frosch said that previous studies were observational in nature and failed to provide concrete statistical results as this study has offered. Morello-Frosch, who was not involved with the analysis, said, “To my knowledge, this is the first intervention to test — like you would in a drug trial — by randomly alleviating a treatment to see what you see.”

Parallel research has identified indicators of crime-reduction and increased community interaction, showing that green spaces are a low-cost answer to improving many facets of a community’s well-being, now including mental health.