Ah, those lithium batteries in our phones. They tend to go flat just when we need them most. Then again, that’s Murphy’s law for you, isn’t it? Encouragingly, lithium-ion batteries are getting better and better with more and more oomph in them. But what if your phone’s lithium battery could recharge itself on the go?

Actually, there are already such batteries in development. Ok then, how about a lithium battery that soaked up carbon dioxide to power itself? Such a battery may soon be on the way too. 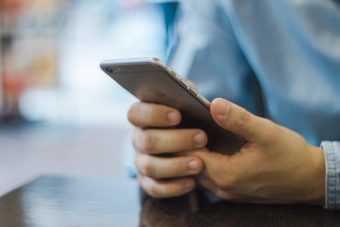 A team of researchers at the Massachusetts Institute of Technology in the United States has designed a type of battery made partly from carbon dioxide captured from power plants. At the moment, power plants equipped with carbon capture systems require as much as 30% of the electricity they generate just so as to power the capture and storage of carbon dioxide emitted by the plant itself. Any process that could improve the efficiency of this wasteful process could be highly beneficial.

This is where the MIT team’s breakthrough comes in. They have developed a new approach that could tap into a power plant’s waste stream to make the material for one of a lithium battery’s main components. The researchers have found a way to convert carbon dioxide electrochemically with the help of a carbon electrode. The key, they say, is to pre-activate the carbon dioxide by incorporating it into an amine solution.

“What we’ve shown for the first time is that this technique activates the carbon dioxide for more facile electrochemistry,” says Betar Gallant, an assistant professor of mechanical engineering at the university. “These two chemistries — aqueous amines and nonaqueous battery electrolytes — are not normally used together, but we found that their combination imparts new and interesting behaviors that can increase the discharge voltage and allow for sustained conversion of carbon dioxide.”

Although the new battery is still in a nascent phase of development, once it is fully realized it could carry on converting CO2 into a solid mineral carbonate as it discharges, according to the researchers who published their findings in the journal Joule. For the moment, the cycle life of the new battery is limited to a mere 10 charges-discharges so researchers will have to improve its rechargeability as well as its cell components’ durability.

“Lithium-carbon dioxide batteries are years away,” Gallant cautions. Yet once they arrive, they “could open up new avenues for tailoring electrochemical carbon dioxide conversion reactions, which may ultimately help reduce the emission of the greenhouse gas to the atmosphere.”